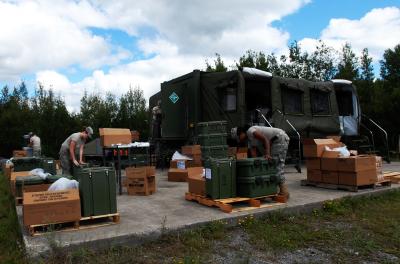 By Sunday evening, more than one thousand New York Soldiers were encamped on remote ranges on Fort Drum, ready to begin the 27th Infantry Brigade Combat Team’s first brigade-level field exercise since the unit returned from Afghanistan in 2009.

Cooks had set up two containerized kitchens in the 27th BSTB’s mock Forward Operating Base at one end of the training area and had set to work making hot meals for the National Guardsmen, who were spread across 14 training sites in Fort Drum’s range area.

In the brigade’s nerve center, several miles down the road from the BSTB’s FOB, staff officers and NCOs worked on filling briefing slides with up-to-the-minute data that would give the brigade commander, Col. Geoffrey Slack, the information he needed to direct a small town’s worth of Soldiers.

“This is my first field exercise with the brigade,” Slack said Monday morning, after a quick sit-down with his staff. “As a relatively new brigade commander, I’m having to get my bearings.”

Slack explained that the field exercise, which spans three weeks (although individual units generally spend two weeks each) will provide a kind of dual opportunity: on one level, he said, Soldiers need good squad- and platoon-level training to provide a foundation of basic Soldier skills and teamwork on which to build.

On a second level, it’s a chance for Slack and his officers - his staff, as well as the commanders of the __ battalions and 30 companies that fall under the 27th IBCT - to get to know one another and learn how best to work together.

“I’m testing my staff to make sure they’re taking the problems I identify and solving them,” he said. “I’m getting to know my leaders. I want to spend quality time with my company commanders and battalion commanders and, to the degree possible, with the platoon leaders and platoon sergeants.”

The 27th’s Soldiers, most of whom arrived on Fort Drum Saturday, lost no time in getting their own training schedules up and running.

1st Sgt. Ronald Patterson of C Company, 2nd Battalion, 108th Infantry Regiment, was overseeing an M-4 qualification range for brigade Soldiers who hadn’t gotten a chance to qualify with their weapons earlier in the year. He said his company of infantrymen will be building toward a team live-fire event later in the two-week training period.

“We’ve been training for the last six to eight months doing movement-to-contact,” said Patterson, referring to an infantry maneuver wherein Soldiers tactically - and quickly - move into position to engage an enemy. “We did dry runs at Camp Edwards in Cape Cod, and we’re doing three days of rehearsals here. I’m expecting a 100 percent success rate.”

All the same, training exercises exist to iron out kinks before going into a combat zone.

“Any mistakes we’re going to make, now is the time to make them,” Slack said.

He said he had been impressed by what he’d seen from his Soldiers so far.

“They’re so serious, and so professional,” he said. “It makes me look forward to getting in my truck and heading to the next training site.”

The annual exercise had only just begun, however, and Slack struck a note of caution for his troops.

“Safety has got to be paramount in everybody’s mind,” he said. “People have to give thought to everything they do out here, because everyone out here is precious.”