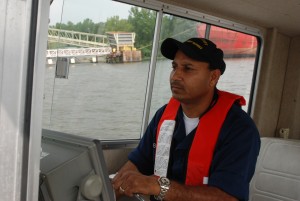 COEYMANS -- The New York Naval Militia teamed up with law enforcement agents from the Department of Environmental Conservation to test Weapons of Mass Destruction/Radiation detection capabilities, Wednesday, August 4 on the Hudson River.

A DEC boat, equipped with a mobile radiation detection system, used the Naval Militia’s Patrol Boat 230 as a target during the exercise. The DEC boat repeatedly passed the patrol boat to get readings from a radiation source onboard.

DEC Law Enforcement is an extra set of eyes and ears, ready to help federal agencies deter and react to homeland threats or emergencies.

The New York Naval Militia is the naval component of the New York State defense forces. Its Military Emergency Boat Service operates a fleet of ten boats on New York waters in support of federal and state agencies and local law enforcement.

“The Naval Militia was key to providing a maritime training platform. They provided an opportunity to interdict in an open water scenario, which helps us determine how close is close based on the level of radiation threat,” said Walter Maloney, Tech. Sgt. for DEC’s Homeland Security Unit in Albany.

While PB 230 worked with DEC, the Naval Militia’s PB 300 assisted the Ossining Police Department in a Maritime Industry Security Exercise north of the Tappen Zee Bridge and PB 440 was stationed at the United States Coast Guard station on Staten Island. All three missions were designed to test security plans, as required annually by federal regulations, and were in support of SUNY Maritime College exercises.

“The beauty of this exercise is the unique interagency cooperation and familiarity we establish. It allows us to work immediately and more effectively during a real world emergency,” said Major General Robert Wolf, the commander of the New York Naval Militia and SUNY Maritime College’s executive director of Trojan Horse.