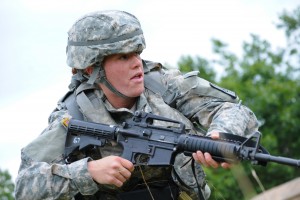 FORT DRUM, N.Y. -- The HMMWV (High Mobility Multipurpose Wheeled Vehicle), carrying six Soldiers, made its way down the dirt road kicking up a dust cloud that would make a desert sand storm envious. Upon reaching their destination, the Soldiers dismount, brush the dust from their uniforms and begin another day of training in the hot August sun.

Members of the 501st Ordnance Battalion (EOD) are conducting the units Pre-Mobilization Training (PMT) at Ft. Drum from August 2-20, 2010 in preparation for a fall deployment in support of Operation New Dawn, the operational name scheduled to replace Operation Iraqi Freedom September 1, 2010.

As part of the three week PMT the unit conducted in depth training that includes Army Warrior Tasks, Battle Drills, combatives, marksmanship, urban operations, and cultural awareness, among others.

“PMT ensures assigned Soldiers complete all theater and destination specific training requirements,” said Lt. Col. Robert A. Mitchell, Commander, 501st EOD. “In short, it ensures Soldiers have the right training at the right time that prepares them to conduct their deployed mission.”

Although the 501st isn’t expecting to be involved in heavy combat, the unit isn’t taking any chances.

“Anything can happen when you’re over there, so we are training for all the possibilities” said Sgt. William B. St. John Jr. a volunteer attached to the 501st.

As with any unit getting ready to deploy into harm’s way, leaders with in the 501st haven’t forgotten that mission success depends on a unit’s ability to work as a team.

“The 501st is a unit of less than 40 soldiers. In order to succeed, teamwork is pivotal,” said 1st Lt. John A. Harder, Commander, Headquarter, Headquarter Detachment, 501st EOD. “It’s been the best part of this training. Everyone in the unit works great together, and that builds moral,” added Harder.

St. John, appreciates the small size of the unit.

“It’s a small unit, so I’m able to easily interact with everyone in the 501st, said St. John. “That, more than anything has prepared me for this deployment.“

The moral in the unit is above par and excitement seems to be in the air.

"The Soldiers are excited for this deployment,” said Harder. “Whether the Soldier is married, has kids or has a great job, they are all looking forward to this deployment.”

The 501st EOD is a relatively new unit. Converted from the New York National Guard’s historic 105th Infantry Regiment in 2005, the Glenville based unit is capable of taking command and control of two to five Explosive Ordnance Disposal companies in a combat theater.