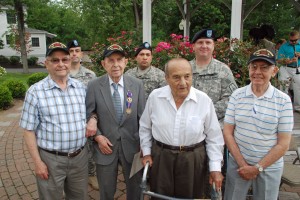 LOUDONVILLE, N.Y. -- Soldiers from the New York Army National Guard helped present the long overdue recognitions to a fellow combat veteran 65 years after his actions in the Pacific during WWII.

Staff Sgt. John Sidur joined the New York National Guard in Cohoes on September 17, 1940. He mobilized with the 105th Infantry Regiment on October 15, 1940, went to California after the attack on Pearl Harbor and in March 1942 went to the Pacific with the Orion. He served as a rifleman from October 1940 through August 1945 with Company B, 1st Battalion, 105th Infantry from Cohoes.

Known as the “Appleknockers,” the 105th Infantry was an upstate regiment, drawing Soldiers from across the Capital Region.

Sidur was wounded on Okinawa on April 21, 1945, as a platoon sergeant for the 39 men in Company B’s 3rd platoon. While operating within the heavily fortified Shuri Line, an artillery fragment lodged in John’s hand and he spent 10 days in the field hospital before returning to his unit.

“A lot of us, we didn’t make it,” Sidur said to news reporters at the award presentation. “We’re the lucky ones that we’re here.”

Sidur already received a Bronze Star for his actions on Saipan, where his regiment defeated the largest Japanese Banzai attack of the war. John was also shot in this battle, but was denied a Purple Heart because medical records of that treatment could not be found. In the chaos, he had been treated by a corpsman attached to the 2nd Marine Division and no record was forwarded to the Army.

Last year, in the family attempt to locate such a record, nephew Bob Greene ordered Sidur’s complete military records from the national archives. There, the family found a record of his treatment for a battle casualty on April 21, 1945. When asked about this Sidur paused and said, "Oh, that was when I was wounded on Okinawa.”

With the new documents, the family received the Purple Heart award and asked the New York National Guard for official representation to present the medals.

“They saw plenty of horrible action, and they earn everything they are given,” Greene said.

The regiment inactivated about five years ago and many of its Soldiers went on to serve with other elements of the 27th Infantry Brigade Combat Team, the modern legacy of the 27th Infantry Division. The 27th Brigade deployed to Afghanistan in 2008 to train and mentor the growing Afghan National Army and police force.

“It’s a thrill for Uncle John to meet a fellow Soldier from the 27th,” Greene said.

Josephine told reporters that Sidur keeps in touch with the division veterans association and the other men he served with in the 105th Infantry Regiment. They included Spike Maillous and Donald Trudeau, a Troy resident and another Purple Heart recipient.