Community Comes out for Video Games 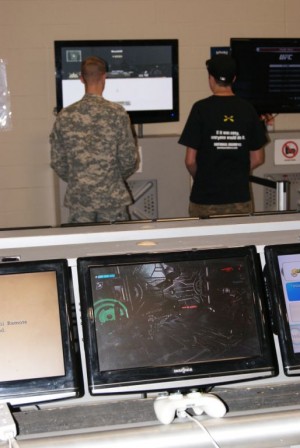 The Interactive Game Experience in Queensbury, N.Y. IGX is a leader in producing live events for the video game industry. The company provides electronic gaming attractions for a variety of different host venues including fairs, festivals, theme parks, consumer shows, colleges, corporate events and sporting events such as the NCAA Final 4 and the Indy 500. For more information on Interactive Game Experience Exhibits go to www.igxnet.com.

To let the community here near Glens Falls, N.Y. learn more about the new Soldier Readiness Center and careers with the New York Army National Guard, the 466th Area Medical Support Company and the 1427th Medium Truck Company supported a Recruiting and Retention event featuring some of today’s most popular video games on Saturday, Sept. 11.

The afternoon competition including "Call of Duty: Modern Warfare 2."

The former New York State Armory was centrally located in downtown Glens Falls. The new Soldier Readiness Center is the community’s new military spot since August 2009, although it is .

"If we build it, they will come," said Sgt. Arthur P. Coon, Recruiting and Retention NCO at the new center. “Our goal is just to get people here.”

The daylong event, called The Interactive Gaming Experience, helped spread the word about the Soldier Readiness Center and the New York Army National Guard units that use the site.

“In this era of intense demands on the United States military, the mission of recruiting outstanding men and women as the New York Army National Guard’s future officers and enlistees is one of the most important contributions we make to this nation and its security,” said Ed Smith, the Recruiting Command’s Marketing Specialist.