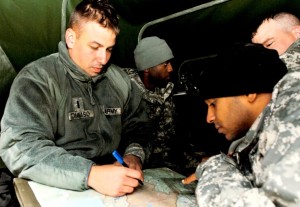 FORT DRUM, NY -- From the time 1-258th’s Fire Direction Center (FDC) receives a fire mission to the moment a shot is fired by their howitzers, less than a minute passes.

Numerous calculations and coordinates are efficiently computed by the group of NY Army National Guard Soldiers in order to engage a target up to 15 kilometers away.

“Accurate indirect fire can be very difficult to achieve due to the numerous factors that come into play,” said Staff Sgt. Aaron Rodriguez, the fire direction chief for the 1-258th’s A Battery from Bronx, NY. “Here at the 1-258, though, we have a really good system devised.”

The unit, based in New Windsor and New York City, trained here October 15-17 in order to refine their indirect fire system and ensure accurate target acquisition.

The method the FDC uses to aim their unit’s 16 M119-A2 105 mm howitzers, though highly complex to untrained personnel, can be broken down into three basic steps: observe, aim and fire.

A designated forward observer (FO) stands watch at the impact zone far ahead of the firing battery, and sends grid coordinates of the long-distance target over radio to the FDC. The FDC inputs this information into their computer system, along with forecast information gathered from their remote weather truck, in order to determine the best method of engagement. Finally, the FDC alerts the cannon crew members to adjust their weapons accordingly, and contact with the target is made.

First Lt. Nicholas Tommaso, the fire direction officer, emphasized the importance of communication between each member of the FDC. “Every single person involved in the firing of our howitzers is integral to the success and safety of the mission,” he said. “If you’re not paying attention and accidentally spew out the wrong grid coordinates, the round could end up hitting a civilian instead of an enemy in a battle zone.”

Indeed, the FDC headquarters tent was buzzing with curt and concise technical dialogue the moment their firing mission was received. As the FO called for fire on designated grid coordinates, the FDC input the information into their system and reacted accordingly.

But before they put their final lead stamp on the target, the FDC took into account a collection of calculations from a crucial element of the team: the AN TMQ-52B Profiler, also known as “the weather truck.”

The weather truck, a remote element of the FDC’s firing system, runs off a generator and calculates the wind’s speed, direction and pressure, which can all potentially alter the path of the round. “The information we send the FDC from the weather truck is so important,” said Pvt. First Class Sixto Flete, a member of the 1-258 HHC from NYC and operator of the weather truck. “There are so many weather related factors that can determine which direction the round flies and how high.”

At the end of the day, the most important tools used to hit the target are the members of the FDC themselves. The group runs on a system of checks and balances to ensure that every step of the firing process is free of error.

“We check every number and manually keep a written record of things even though we put them into the computers,” said Rodriguez. “Even though we can fire more quickly if we don’t, we want to make sure we do it right.”