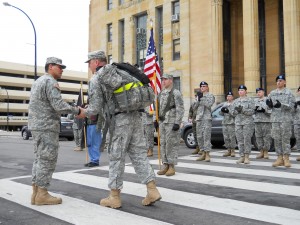 Buffalo, N.Y. -- Soldiers from the New York Army National Guard’s 105th Military Police Company here fought a battle against hometown hunger during the fifth annual Heroes’ March Against Hunger Dec. 4. One Guardsman in particular was vigilant about this mission because last year at this time he confronted with the harsh reality of disparity he sought to eradicate. The company presented Spc. Alex Gonzalez special recognition for his extra efforts to support the cause long after Soldiers concluded their march of more than 11-miles from the Williamsville Town Hall to Buffalo City Hall. “Gonzalez goes above and beyond collecting in his neighborhood,” said Sgt. Kevin Lang, a fellow Soldier in the company and founder of the Heroes‘ March. Gonzalez went door to door passing out a combined total of over 400 flyers and letters and collected food from his neighbors. He was motivated in part, he said, after Lang and other members of the 105th MP Company helped him last year during the holidays when he fell upon hard times. “My son was hospitalized last year at this time,” Gonzalez said. “Members of the unit came to the hospital and asked me if I needed anything.” His commitment to the Hunger March intensified after receiving the support of his unit during a difficult time, Gonzalez said. “I don’t think people should suffer during the Holidays,” he said. “This was my way of giving back.” The potential for wintry weather would not stop the Soldiers’ plan to go on with the march. More than eight inches of snow fell at Buffalo Airport in the hours before the march, with some two to three feet of lake effect snow falling south of Buffalo. Buffalo received national attention when motorists were stranded on the New York State Thruway for some 12 hours when a four-mile stretch of highway was closed due to those lake effect snows on Dec. 2. “We knew we were going to do it, regardless of the weather,” Lang said. The moral was so high. We knew we were going to do it, regardless of the weather,” Lang said. “Anytime they [the Soldiers] can get out and do something like this they get fired-up.” For the morning of the march, the Western New York skies cleared, winds were low and the brisk temperature hovered near 20 degrees. But the 105th showed no signs of slowing down along their route of march until they reached their destination. “Once we got moving, the motivation from the event helped keep us warm,” Lang said. The food collected by the 105th MP Company was donated to the Western New York Food Bank to benefit families in the area during the holiday season. Supporters of the Heroes‘ March included the Wegman’s Grocery Stores, the Vietnam Veterans/Legacy Veterans and the Buffalo area Recruiting and Retention Command.