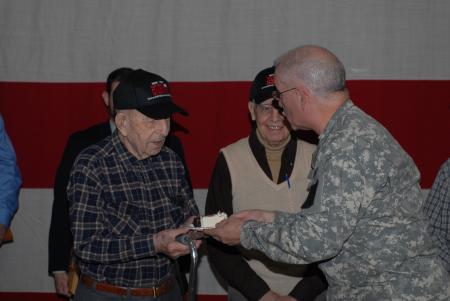 LATHAM, NY--A 92-year old World War II vet, who was wounded on Okinawa and Saipan, and a 19-year old helicopter mechanic waiting for his first deployment, joined forces to cut the birthday cake as the New York National Guard celebrated the 374th birthday of America’s Citizen Soldiers on Monday, Dec. 13. The annual gathering at New York State Division of Military and Naval Affairs headquarters celebrates the National Guard’s past, but is also a salute to the men and women, Soldiers, Airmen, and federal and state civilian employees who serve and who support those who serve, said Maj. Gen. Patrick Murphy, the Adjutant General of New York. “It is truly a team effort, as you can tell from the mix of uniforms and suits, “Murphy said. The National Guard, a force composed mostly of part-time Citizen Soldiers, traces its birthday back to Dec. 13 1636 when the General Court of the Massachusetts Bay Colony passed a law establishing formal militia companies in the colony. These companies were made up of all adult males older than 16 and were expected to meet and train in military skills regularly. Traditionally the oldest Soldier and the youngest Soldier present, team up to cut the cake at Guard Birthday events. In this case, Murphy opted to have the honors of the oldest cake cutter performed by John Sidur, a resident of Loudonville, NY who enlisted in the New York National Guard’s 105th Infantry Regiment in July 1940, a month before President Franklin D. Roosevelt federalized the National Guard for one year. He Joined the Guard because the draft was going to be instituted and he figured he could serve for one year and get his military service over and done, instead of waiting to be called up, Sidur explained. The Japanese attack on Pearl Harbor intervened, though, and Sidur and the rest of the New York National Guard’s 27th Division served a total of five years; serving as defenders of Hawaii and then the invaders of Saipan and Okinawa. “I enjoyed being in the service, even though I got hit twice: once on Okinawa and once on Saipan,” Sidur said. Being asked to be part of the birthday event was a real honor, he said. “I was glad to be where I was and I am lucky to be here,” he added. Pvt. 1st Class George Wade, of Niskayuna, NY, the youngest Soldier at the Dec. 13 cake-cutting, headed for basic training in July 2009, 69 years after John Sidur enlisted in the National Guard. Although he is 19 he looks much younger, Wade admitted. “I’ve been called baby-faced,” he said. He was honored to be part of the same event with Sidur, and two other World War II Guardsmen-- Spike Mailloux, age 87 and John Trudeau, age 89-who attended the ceremony. “I want to be in their place someday, carrying on their tradition, “he said. “I want to deploy. I want to do that to get the experience they’ve had.” The New York Army National Guard’s 42nd Infantry Division also celebrated the Guard’s Birthday with a cake-cutting ceremony, held on Saturday, Dec. 11 in conjunction with the change of command of the Division’s Headquarters Company. Pvt. 1st Class Kevin Adams joined the division commander, Brig. Gen. Steven Wickstrom in cutting a Guard Birthday cake during the division’s weekend drill at its Troy, NY headquarters. Division Command Sgt. Major Robert Jenks read the iconic “I am the Guard” to the assembled Soldiers. "For three centuries the custodian of security and honor, now and forever ... I am the Guard, “Jenks read. In New York the first citizen-soldiers were members of the Burgher Guard, organized by the Dutch East Indian Company in1640 to help protect New Amsterdam from their English neighbors in Massachusetts and Virginia or from hostile natives. New York gave the country the term National Guard for its militia forces in 1824 when the 7th Regiment of the New York Militia renamed themselves the National Guard to honor the Marquis de Lafayette, a hero of the American Revolutionary War who had commanded a force called the "Guard de National" in the early days of the French Revolution. Citizen soldiers of the militia and National Guard have fought in all of America’s wars from King Philips War against Native Americans in the New England Colonies in 1675 to the struggle in Afghanistan today. Currently more than 500 members of the New York Army and Air National Guard are serving in Iraq and Afghanistan while 250 Soldiers and Airmen are on State Active Duty performing a security mission in New York City, Murphy said.

The cake for the event was provided by the Association of the United States Army’s Capital Region (Albany, NY area) Chapter.