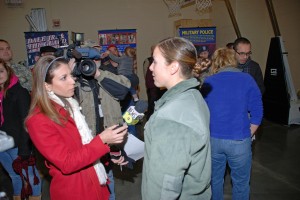 Specialist Ashley Towers from Corinth, NY and assigned for deployment to the Jamaica, Queens-based 442nd Military Police Company now serving in Iraq speaks to reporter Marie Luby from WTEN TV 10 News in Albany prior to the Annual Christmas Eve Road March in recognition of deployed military personnel over the holiday period. More than 320 military members from four service branches, veterans, military family members and friends of the community participated

In addition to New York National Guard members from many units, one group of marchers, comprised of military Family members and friends, participated on behalf of a deployed platoon of Soldiers assigned to the Army’s 10th Mountain Division based at Fort Drum.

Some area mothers of Active Duty Soldiers serving in Afghanistan marched carrying dog tags which bear the names of their loved ones. The first Christmas Road March was conducted in 2004 when Soldiers of the New York Army National Guard’s Company C, 2nd Battalion, 108th Infantry, which was then based at the now-closed Glens Falls Armory, were away from home in Iraq over Christmas. Other Soldiers assigned to the armory, from the 466th Area Medical Company, got together to conduct a road march, the military term for a walking movement, in their honor.

Since then, the march has become a tradition to recognize the sacrifices being made by all American service men and women who are on duty away from their Families during the Christmas season.