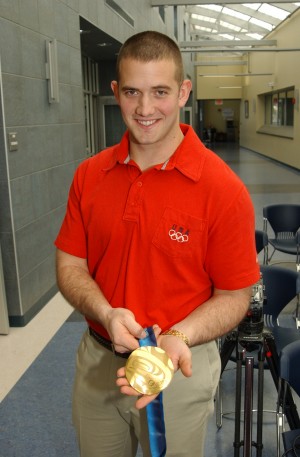 Olsen, a member of the United States Bobsled team since 2007 enlisted in the Army National Guard in a brief ceremony here on Thursday, Jan. 6.

Olsen will train as a human resource specialist for the Joint Force Headquarters after this season’s World Cup ends.

Once he completes his individual entry training, Olsen plans to apply for the Army World Class Athlete Program which provides outstanding Soldier-athletes with support and training to compete in national and international competitions while maintaining a professional military career and promoting the US Army to the world.

"I hope to be selected and as a Soldier-athlete, I hope that I can give back as much to the program as they are giving me. My plans are to continue to earn medals and make a name for my sport and the program," Olsen said.

Olsen made the World Cup team in his first season and became one of the nation’s top bobsledders.

Olsen is one of two pushers on the four-man team.

In 2008, Olsen earned a spot on sled USA 1 with driver Steven Holcomb, winning two silver and two bronze medals in the first half of the World Cup tour.

Olsen also helped push Holcomb to a first place finish at the 2009 National Championships for four-man and a silver medal at the inaugural World Cup in Whistler, Canada.

At the 2009 World Championships, Olsen teamed with Holcomb again to win gold in the four-man and a Gold Medal in the 2010 Winter Olympics.

"The wealth and strength of the New York Army National Guard comes from the long-standing tradition of talent, abilities and dedication of our service members. As a world class athlete Justin has distinguished himself as the best of the best and brings to us those exact talents and desire to serve, that we look for in any of our Soldiers," said Lt. Col. Steve Rowe, Commander of the New York Army National Guard Recruiting and Retention Command.

"It’s great to have someone who has already represented his country so well and we look forward to the contributions he will continue to make in his service in the nation and the Guard," Rowe said.

Selection in the Army World Class Athlete program is open to members of the active Army, Army Reserve and National Guard who compete in an Olympic sport and have maintained good military standing. Once a National Guard Soldier is selected, they are brought on active duty and performance is monitored for selection and attendance to required military schools to ensure program Soldiers remain competitive with their military counterparts.

Since the program’s inception in 1997, 40 Soldier-athletes have participated in the summer and winter Olympic Games winning Gold, Silver and Bronze Olympic Medals.

Since 1948, 615 Army Soldiers have represented the US at the summer and winter Olympic Games as athletes/coaches, earning 142 medals in a variety of sports from bobsled, track and field, wrestling, boxing and shooting.