When the 69th Leads the Parade, Their Dogs Come Along 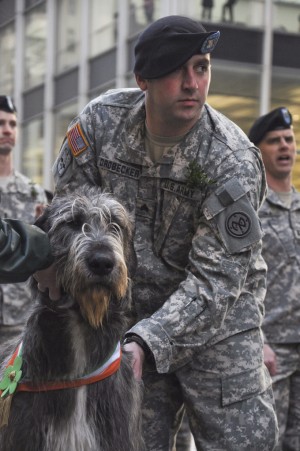 For 160 years, the Fighting 69th has led New York City’s 250-year old St. Patrick’s Day parade, and for as long as anyone can remember, Irish wolfhounds like Benny and Jerry have been there at the front of the line.

Ask the Soldiers holding the leashes, however, and they’ll say it was less of a walk, and more like a pull. "It’s a 150-pound dog -- it pretty much walked me," said Spc. Daniel Messina, the unit’s Soldier of the Year, adding that both he and Sgt. Adam Drobecker, the unit’s Non-Commissioned Officer of the Year, often found the dogs pulling them toward strange whims as the dogs took in the estimated two million spectators at America’s largest St. Patrick’s Day parade.

Nonetheless, both Soldiers said they were thrilled by their opportunity -- to be in the front of the St. Patrick’s Day parade, to be guiding the unit’s mascots, to be guardians of such a long tradition.

"The Irish wolfhounds and the regiment have a very long history, dating back to the very beginning of the regiment," said Eileen Flanagan, for 20 years owner and handler of the unit’s dogs. "They’ve always had them in parades."

Flanagan said the protective instincts behind the dogs’ normally gentle nature were what inspired the unit’s founders to adopt them as mascots, as well as the source for the motto emblazoned on every unit crest: "Gentle when stroked, fierce when provoked."

"They were originally battle dogs, which is why the regiment took them as a mascot," Flanagan said. "Their main job was to protect their master’s back. They wouldn’t go in and be aggressive, but if you were threatening their owner, they would take you down. And it’s not a dog that you want to see coming at you angry -- it’s a very fitting mascot."

The crowd saw no glimpse of ferocity from Benny and Jerry on St. Patrick’s Day, but what they saw was something very important to the Soldiers of the 69th: the continuation of the St. Patrick’s Day tradition, a tremendous source of pride for so many in the much deployed, much celebrated Fighting 69th.

"You take a unit that has a celebrated past; it leaves something to live up to," said Thomas J. Fitzsimmons, commander of the unit’s veterans corps. "Our past, to us, is very important. The most important part of the past is that no one else forgets. We haven’t -- we want to keep it that way."

Fitzsimmons, who has marched in nearly 50 parades, said while upholding the traditions of the past is key, he sees the Soldiers of today preparing to go to Afghanistan in November, and he said he is encouraged by both what he sees as respect for the past and motivation to succeed in the present.

" It was a great honor to lead the New York City Parade," said Drobecker, "especially on the 250th anniversary. To be up front with the battalion’s mascot, the Irish wolfhound, is a great honor. It’s been something they’ve been doing for years and years, and I just felt privileged to serve in a unit with such history and tradition.

"I love representing my unit," said Messina. "It’s the best unit ever -- the Fighting 69th."