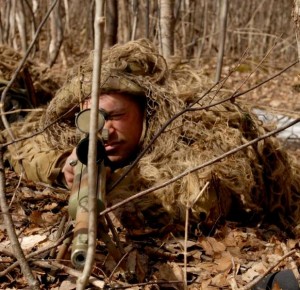 ORISKANY, NY (03/22/2011)--They walk for miles, sometimes days in advance of other troops, silently snaking through the terrain to find the enemy.

These Soldiers are the four-man sniper teams of the 2nd Battalion, 108th Infantry’s scout platoon, which is deploying to Afghanistan in 2012 with the battalion as part of the 27th Infantry Brigade Combat Team. To prepare for the deployment, the platoon of Guardsmen rode UH-60 Blackhawk helicopters to the New York State Preparedness Training Center here on March 18.

Once off the helicopters, the snipers broke off from the scouts, trudged through the snow and mud, slipped into the woods, found a high, dry spot, donned their camouflage sniper suits and began quietly practicing their skills: target acquisition, reconnaissance and surveillance. As they would in war, the snipers used high-powered scopes to observe an area of interest and targets.

In wartime, the tactical situation dictates whether the snipers will destroy or merely observe their targets. Their main mission is gather intelligence, and their weapons range from their rifles to their radios, according to sniper team leader Spc. Mark Dorsey, who is also a police sniper and trains SWAT teams.

If they observe the enemy planting an improvised explosive device, they alert the scouts by radio so a clearing team can remove it, Dorsey said.

"In some cases, the radio is a bigger tool than the gun," Dorsey stressed.

At their concealed position, the four snipers split into pairs to divide up the work. One pair pulls security, guarding the other pair as they watch the target using a tripod-mounted scope and a rifle-mounted scope - "one guy on top of the weapon and one guy on glass," as Dorsey puts it.

From their concealed location, the snipers also study the area to the front of their position and sketch it, including the locations of enemy personnel, their equipment, telephone poles, trees and buildings -- right down to their doorways and windows.

"We are always looking for targets, whether stationary or moving and we update our sketch," Dorsey said. "We stay in a hidden position for as long as possible. Our job is to not be seen."

The 27th Infantry Brigade Combat Team’s mission will be to train and advise the Afghan National Army.