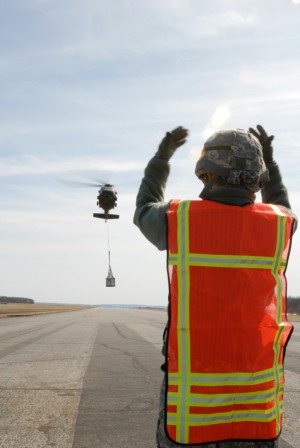 Most of the roads in Afghanistan are narrow and impassable by the unit’s vehicles, so moving supplies by helicopter is critical for units operating there, explained said Sgt. 1st Class Richard Richardson, the NCO in charge of the training

"In order to provide the units with support, we need to air lift equipment, and the fastest way to do that is using helicopters to carry supplies," he said.

The 2-108th will deploy to Afghanistan in 2012 as part of the 27th Infantry Brigade Combat Team. Their mission will be to train and advise the Afghan National Army.

As the day progressed, the Soldiers learned how to load supplies into large cargo nets and use hand-and-arm signals to guide the helicopter crews to pick up and drop off the supplies.

"This is new to a lot of Soldiers in the unit that have not had the opportunity to have this type of quality training," Loy said. "At the same time, we have a lot of officers and NCOs that have the experience to teach these Soldiers."

"I have never done this type of training before and it will be very useful when we deploy to Afghanistan," said Landrigan, a Company E Soldier. "I learned a lot today."

Spc. Amanda Tripple, also a member of Company E, said she was excited to guide the helicopter.

"After I took the hand-and-arm signal training and was able to practice, I got better at it and I could remember what I had to do," recalled Tripple, a truck driver. "I thought about each step of the process and it became easier. At first I was nervous, but after a while, I knew what had to be done and I did it."

The 2-108th Infantry will continue to conduct training as they prepare to deploy to Afghanistan in 2012 .

"We will be doing this same mission in Afghanistan," said Capt. Richard Redmond, company commander of Headquarters and Headquarters Company. "Moving Soldiers and supplies from once place to the other on the battlefield...that is what we wanted to get out of this training today and that is exactly what we ended up getting out of it. Everything went successful."

The battalion’s scouts also trained on boarding the helicopters to be airlifted to a landing zone. Once there, they split into sniper sections and scout sections for individual training related to their respective missions.

"The operation today went extremely well," Richardson said. "We did air mobile missions, we loaded troops, we did communications...we did the gamut in eight hours when most units cannot do that in two days."

"It is a good day anytime you can get aviation assets for joint movements. It is very rare that we get to do this type of training. Maneuvers, being able to use communication assets, and getting the snipers in the tree line makes for an excellent day, " Loy said.