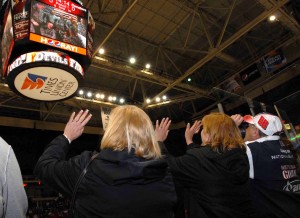 Families of the 501st Ordnance Battalion Soldiers look up and wave as the Soldiers appear on the Times Union Center’s jumbotron during an Albany Devils hockey game April 3.

Thanks to the unit’s family readiness group, the Albany Devils hockey team and a satellite feed, ten Soldiers appeared on the Times Union Center’s jumbotron during a break in the Devils’ game against the Binghamton Senators. The families were elated to see their Soldiers, who deployed to Iraq with the unit in December.

"It was awesome," said Derek George, the father of Sgt. Nicholas George, of Troy, N.Y. "It was a good feeling to see him, and see he was ok."

"I loved it," said Landy, also a Troy resident. "It was amazing. It made me closer to him, almost as if he was at the game."

Reached by phone in Iraq, the Soldiers said they could only hear their loved ones, but that alone seemed to be a boost.

He heard his daughter Victoria say she loved and missed him, 1st Sgt. Joseph Landy recalled.

"It made me feel good," he said. "I wish I could’ve seen her, but it brought my spirits up."

"I hear her voice, everyday, but this made me feel very good," Harrell said.

Seeing her husband Staff Sgt. Shawn Nethaway on the Jumbotron made her proud, said Amy Nethaway, of Latham, N.Y. The applause increased her pride in her daughter, said Harrell’s mother, Brenda Coleman.

"It wasn’t a full house, but a lot of them stood up and clapped," recalled Coleman.

The cheers and the personal thanks he received from fans touched him, and affirmed that what his son is doing in Iraq is "respected and admired by everybody," George said.

"Everybody appreciates it," George said.

"It’s near and dear to our hearts to recognize the military in any way possible," Valente said, adding that they reached out to a military contractor, a local television station and other organizations to make the satellite link.

The families also prize their links to each other via the FRG. Not being able to consult her husband on household matters is a hardship, and not knowing what’s happening to him and the unit is frightening, but the FRG connections help, Carole Landy said.

"You can actually talk to them, because they’re going through the same thing," she said.

The situation in Iraq seems quieter now, and increased phone contact, along with the experience of the previous deployment, has eased the strain of separation, George said. Nonetheless, the FRG is a morale booster and a Godsend, allowing families to meet and talk with others who understand, he stressed.

"We’re all different as human beings, but we all share a common situation -- having a Soldier in a combat zone," he said.

His son also deployed to Iraq in 2004, and took part in many combat patrols, said George.

"That’s when my hair turned gray," George said. "That was a very long year."

The FRG is also a resource families can contact when problems arise, Coleman said. This is the first time Harrell has deployed, and "I hope the last," she added.

"Me too!" Marissa chimed in.

The FRG needs to arrange more events, Carole Landy said. Scheduling and individual tastes make planning FRG social events difficult, she explained. The Army’s Strong Bonds program - which organizes retreats for couples and families to strengthen their relationships - should be expanded to include FRGs while Soldiers are deployed, she added.

They expect to host more events like this, Valente said.

"We want to do more, and plan to do more next year," he explained.