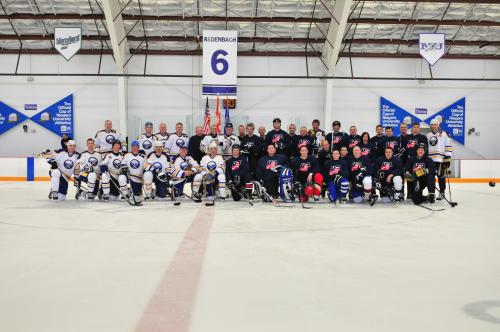 NIAGARA FALLS-- Members of the 107th and 914th Airlift Wings hockey team ( in dark blue) and almuni of the Buffalo Sabres professional hockey team (in white) take a group photo before playing a charity hockey game on Sunday, April 10. The event raised money for the wing family readiness groups.

"It was great working together with other community organizations to make this a successful event," Goetze said.

The event -- won by the former Sabre’s nine to three-raised $5,000 for the Niagara Falls military families.

Master Sgt. Brian Schurr of the 107th Airlift Wing was one of the lucky members of Team Niagara who got the opportunity to play against some of his childhood hockey heroes. While the game was played for fun, he was thoroughly impressed by the Sabres’ skills on the ice. Even more impressive was their handling off of the icem he said. “The alumni were more than giving of their time. They made sure to sign every autograph and they went out of their way to talk to the players and families,” Schurr added. The money will help pay for events and functions that ease the burden placed on families while their family member is deployed and events that promote overall morale throughout the base. A summer kids camp is planned as well as a spouse and volunteer appreciation dinner, which some of the funds from this event will support.

“The idea for the fundraising event came from Karen Karamanoukian, Executive Vice President of the Vein Treatment Center, in Williamsville. Karamanoukian approached the base with the idea of a fundraiser to help local Airmen.

Vein Treatment Center covered all the costs from the ice time at the university to the chicken barbecue on base. This enabled the ticket sale proceeds to go directly to Family Readiness Group. As a token of the units’ appreciation, Col. Jim McCready, 107th AW Commander, presented Karen Karamanoukian with a flight helmet bag sewn with patches representing both units. Following the game, the alumni were welcomed on base where they experienced firsthand the mission of the Niagara Falls Air Reserve Station. The alumni were treated to a chicken barbecue, a tour of a hangar and the opportunity to sit at the helm of a C-130. Pilots and loadmasters were on hand to answer any questions. In turn, the alumni returned the gesture and offered members and their families’ autographs and posed for photos. Events such as these will only make the association between the 107th and the 914th stronger. In April of 2008, in response to the BRAC decision of 2005, the 107th Air Refueling Wing converted from a refueling mission to its current mission as an airlift wing. The 107th AW works with and shares the same C-130 airframes as its counterparts, the Air Force Reserves 914th AW. The two associated units work together, sharing the same resources. When Airmen play well together it builds a bond that carries over into the work place, enabling them to conquer the hurdles that lay ahead, McCready said. “This was a great event for all involved. There was seamless teamwork between the 107th and 914th. It’s another fine example of our partnership,” he said. “We can’t thank the Sabres Alumni Association and Karen Karamanoukian enough for all of their support.”