Shadow RQ-7 Ensures Security From Above 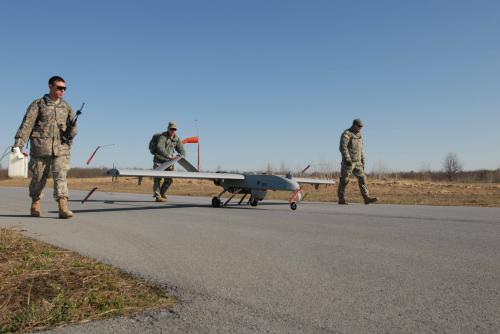 FORT DRUM, N.Y. (04/18/2011)-- The New York Army National Guard’s 27th Infantry Brigade Combat Team will have a hawk’s eye view of the battlefield thanks to the Soldiers who operate the brigade’s Shadow RQ-7 unmanned reconnaissance aircraft.

Over a dozen Soldiers of the brigade, which is deploying to Afghanistan in 2012, flew the cutting-edge aircraft from Fort Drum’s Wheeler Sack Airfield here on April 15 and 16. The Soldiers, who belong to the brigade’s Detachment 1, Company B, Special Troops Battalion, flew four training missions during a brigade command-post exercise here.

It was the first time the detachment flew the aircraft at Fort Drum.

"We are the commander’s eye in the sky," said Edwards, who is from Livonia, N.Y.

Though the Shadow drones like an overused lawnmower, Soldiers operating it by remote-control can fly the aircraft to heights of 15,000 feet, use it’s infrared camera system to see minute details on the ground and gather crucial intelligence for the brigade. That intelligence, including enemy locations and actions, helps improve security for friendly forces and civilians, said Edwards.

Safeguarding lives is the most rewarding part of the job, said Shadow-operator Pfc. Brian Delaney, of Buffalo.

"The main purpose of the aircraft is to keep lives on the ground safe, both civilian and military," he said.

Over- watching troops to keep them safe is one of the exciting aspects of operating the Shadow, said Shadow-operator Sgt. Kyle Benedict, of Syracuse. The Soldiers who operate the Shadow must stay abreast of the latest intelligence and recognize suspicious activities in order to transmit accurate information to the brigade, he added.

The Shadow’s infrared camera is sensitive enough to discern the temperature difference of freshly turned earth -- a sign of new digging, which could indicate the emplacement of IEDs, Benedict said. To get a better of its optical capabilities, imagine you’re standing on a ledge on the Empire State Building, looking at a penny on the pavement far below, he explained.

"You can actually read the date on the penny using the Shadow’s camera," Benedict said.

The Shadow can also relay radio transmissions between units on the ground, Edwards explained. Since it’s easier to maintain than a helicopter and can stay aloft longer, the Shadow is more cost-effective, he added.

Berardicurti, who has 15 years of experience in Army Aviation and served as a crew chief on a CH-47 Chinook helicopter, said he was impressed by the Shadow’s capabilities, including the fact that Soldiers operate it by remote-control.

"You can go into an area and help guys on the ground without putting more Soldiers at risk," said Berardicurti, of Rochester.

Though he was nervous the first few times he launched the Shadow, training and practice helped him overcome the jitters, Delaney said. Soldiers of the unit are well-trained and methodical, he stressed.

"The favorite part of what I do is flying," Delaney said. "It’s what we’re here to do, and we do it well."