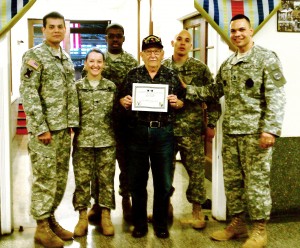 Barnet Schulman displays his New York Guard award with members of the 427th Forward Support Battalion, some 68 years after his one-year service with the New York Guard in 1943-44. Photo courtesy of Estelle Schulman.

Barnet Schulman reached out to the Soldiers as of the 1st Battalion, 258th Field Artillery when he walked in to the armory on 168th Street to request assistance to receive an old award from the New York Guard, the state’s all volunteer military force.

“I, Barnet Schulman, enlisted in the New York State Guard on March 24, 1943,” said the letter he carried in hand as a statement of his service. “I was a member of Company E, Fifth Regiment, located on 1122 Franklin Ave, Bronx N.Y.”

Schulman explained that in the summer of 1943, New York Guard members deployed to Charemont, Mass. In order to help local farmers with their crop harvest. “They had no help, with all the men in the Army and Navy,” Schulman said, “so the New York Guard was called to help.”

He explained that he left the New York Guard to enlist in the Army in WWII. Other than his discharge documents for the New York Guard, he had nothing tangible to mark his service, and wanted to see the situation rectified.

“To show my service, I am requesting the New York State Guard Ribbon/Medal,” Schulman appealed. “It will make me very happy, and I will be able to sleep at night.”

Schulman lays claim to a decorated service in WWII, serving in Europe and earning three Bronze Stars, a Purple Heart, the Combat Infantryman’s Badge and four battle stars for the European Theater of Operations. After his two years of service, Schulman was honorably discharged in 1946.

“I knew the state would help, it was just a matter of sending the correct information,” Lopez added. “All of us listened and wanted to help, and I’m glad we got it done.”

After compiling all the documents necessary for Schulman’s request, the Soldiers forwarded the application packet to the New York Guard Headquarters in Latham. What came back was a dream come true for Shulman.

Along with the award were pictures of the 5th regiment, where he served, giving Schulman a permanent keepsake of his past.

“I would like to thank Sgt. 1st Class Lopez, Staff Sgt. Maxime Pierre, Staff Sgt. Alexander Vargas, Sgt. Juan Grisales and Spc. Joanna Teczynska.” Schulman said some 68 years after his initial enlistment in the New York Guard.” I don’t know how [you all did it]. I have been trying for over 60 years to get this ribbon. I thank you with all my heart.”