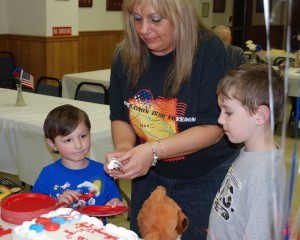 The family of Staff Sgt. Shawn Nethaway, his wife Amy and sons Logan, age 8, and Noah, age 4; cut a cake during a "Just for You" recognition ceremony, April 26. The Retired Enlisted Association, Chapter 120 of Schenectady held the event to recognize families of deployed Soldiers assigned to the 501st Ordnance Battalion, Glenville, N.Y.

SCHENECTADY, N.Y. -- Kim Baker misses the little things with her husband Maj. Doug Baker, a New York Army National Guard Soldier deployed to Iraq. She misses watching TV with him or just relaxing and spending time as a family.

“We are really thankful that they recognize us for what we are going through, it’s nice to know you are appreciated as well,” said Baker, who lives in Saratoga Springs with their children Ben, 11, Rachel, 7, and Sam, 5.

“It’s really amazing that they did this for us, it means a lot,” said Nethaway’s wife Amy, who lives in Latham with their children Logan, 8 and Noah, 4.

The Retired Enlisted Association Chapter 120 is a nonprofit organization made up of local retirees who foster patriotism and civic duty.

"We wanted to do something special for family members and thought a stress free night out for a spouse and children would be a nice break from their everyday issues," said Kathleen VanIderstyne, the chapter’s project coordinator.

Their Soldiers are members of the New York Army National Guard’s 501st Ordnance Battalion, based in Glenville, N.Y. About three dozen Soldiers from the 501st deployed to southern Iraq in late 2010.

"It’s awesome that organizations like this recognize the struggles our families go through when a loved one is deployed, said Staff Sgt. Frank White, 501st Rear Detachment, Noncommissioned Officer in Charge. "It means a lot to our Soldiers and their families when they are remembered."