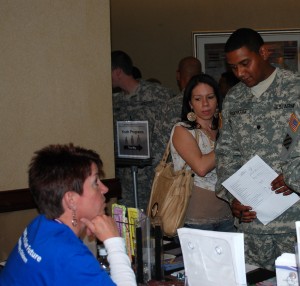 WHITE PLAINS, NY-- There have been a lot of changes in his house since New York Army National Guard Staff Sgt. Jason Diaz left for Iraq in 2010, but the thing that stands out the most is how independent his wife Nisha is now.

“She finished her degree and did a great job of taking care of our family while I was away,” said Diaz.

Nisha Diaz pretty much got used to doing it all on her own, which is a little tough on her husband.

“I’ve been home for a little over a month and the hardest part is finding a place where I belong” said Diaz.

Coping with changes like those in the Diaz household, and learning how to embrace them is what the New York National Guard’s Yellow Ribbon Program is about.

While he was on his mission, Nisha Diaz was on hers.

“I learned how important management skills are and how to juggle three kids, three dogs and being a full time student,” said Nisha. “Things are much better now that he’s home, but we’re still getting used to him being there to help take care of the kids and take the burden off of me,” Nisha added.

Diaz along with roughly 150 Soldiers from his unit met up again for their 30-day Yellow Ribbon Reintegration Program event, May 14.

The Soldiers from across the state and their families gathered for a two-day session during which they learned about problems and concerns that can crop up when National Guard Soldiers return from a combat zone to civilian life.

“The Soldiers of the 442 took care of their mission and it’s only right that we take care of them, said Col. Reginald Sanders, Commander of the 369th Sustainment Bde. “This is a great program and our Soldiers and families deserve the best we have to offer."

The Yellow Ribbon Reintegration Program requires Soldiers to be present at approximately 30 and 60 days after their return from a combat zone, and invites families to attend as well. The sessions are held in a non-threatening, non-military environment, to provide Soldiers and families a chance to share experiences and talk frankly with each other and counselors about their experiences.

Yellow Ribbon isn’t just about coping with changes at home, the program offers information providers in a variety of areas, including veterans benefits, education, insurance and employers looking to hire experienced military personnel.

Spec. Eloy Rodriguez, a signal support specialist from Bronx was excited that the Department of Labor was on hand to provide assistance.

“This is perfect timing for me, I’m looking for a career change and was really worried about finding a new job,” said Rodriquez. “My wife pretty much took care of everything else, she taught my youngest how to feed herself and walk while I was away.”

Rodriquez and his wife Carol brought their two little girls, Zyhara, 6 and Miracle, 18-months and were eager to learn about National Guard Youth program activities and camps available to their children.

More than 3000 New York National Guard Soldiers have been through the program since its inception in 2008.