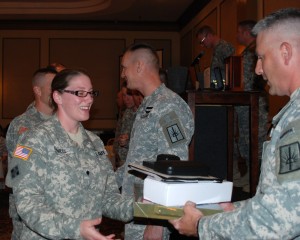 KERHONKSON, NY -- Nearly 160 Soldiers from the 827th Engineer Company, which includes Soldiers from Buffalo, Walton and Horseheads, N.Y. were recognized for their service during their Freedom Salute ceremony, here May 22.

The Soldiers received a flag and other mementos to commemorate their service in combat in support of Operation Enduring Freedom. The children and spouses of Soldiers also received items.

“This is just one way the National Guard recognizes our Soldiers for their service and thanks their spouses, children and employers for the support they have shown throughout the deployment cycle,” said New York State Command Sgt. Major Frank Wicks.

The Freedom Salute Campaign is one of the largest Army National Guard recognition endeavors in history and was launched nationwide in 2003 to recognize members of the Army National Guard for their service during Operations Noble Eagle, Enduring Freedom, Iraqi Freedom and New Dawn.

Each Soldier received an encased American Flag, a lapel insignia, a commemorative coin and a certificate of appreciation from the Army National Guard. The Soldier’s spouse/significant other received a lapel insignia while Soldiers with children received a Future Soldier Footlocker Kit. The kit included the Daring Eagle board game, Mission Command game, and Army National Guard trading cards.

The Soldiers returned from their deployment on Feb 16. While in eastern Afghanistan, the 827th Engineers served with Task Force Red Dragon and the 1092nd Engineer Battalion providing engineer support and building and repairing roads at 25 locations throughout the country.

“I’ve been following the news since we’ve been home and it’s clear that the infrastructure we built and the security we provided has had a direct impact on the success taking place in the specific areas our Soldiers worked,” said Capt. Jeffrey Miles, Commander, 827th Engineer Company from Buffalo. “Soldiers in that area are able to get to and interact with the citizens of Afghanistan, we made a difference.”

The Freedom Salute was conducted in conjunction with the New York Army National Guard Yellow Ribbon Reintegration program in which Soldiers and their families spent the weekend at the Hudson Valley Resort & Spa working through issues surrounding a return from combat.

The Yellow Ribbon Reintegration Program requires Soldiers to be present at approximately 30 and 60 days after their return from a combat zone and invites families to attend as well. The sessions are held in a non-threatening, non-military environment to provide Soldiers and families a chance to share experiences and talk frankly with each other and counselors about their experiences.

“The reintegration is a great event. Soldiers get to see each other again and families have a chance to bond. They have heard so much about each others families, now they have a chance to meet and spend some quality time together,” Miles said.

“Having employers here ready to hire Soldiers on the spot is huge,” said Miles. Roughly 30% of his Soldiers are currently unemployed or looking to change employment. “Having folks here to help with rumrsquo;s and provide guidance on how to search for jobs is a huge leg up,” Miles added.

“The resiliency training they provide is significant, it really hits home,” Miles said. “In many cases Soldiers don’t realize or aren’t able to admit they are experiencing negative behaviors. The information they receive helps them understand why they may be different now and provides tools and resources for dealing with it.”