CLOSE TO THE HEART: World War I Soldier’s Poem and Personal Artifact Honor the Fallen in the 42nd Division 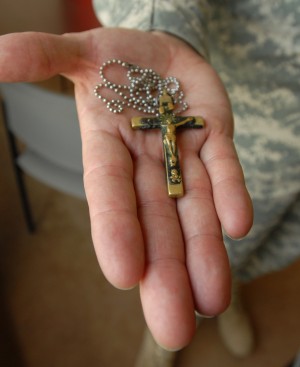 Lt. Col. James Gonyo, commander of the New York Army National Guard’s 1st Battalion 69th Infantry displays the crucifix carried by Sgt. Joyce Kilmer, a famous poet and member of the 69th Infantry’s intelligence section who was killed in action in World War I. Kilmer’s crucifix has been handed down from commander to commander since then and carried on a daily basis. Kilmer, who wrote the poem "Trees" penned the poem "Rouge Bouquet" about death on the battlefield shortly before his own death.

NEW ORLEANS, LA -- In keeping with a 42nd Infantry Division tradition that dates back generations, at 11:45am on the 14th of July, 2010 the Rainbow Division Memorial Veterans Foundation begins its annual Champagne Hour ceremony.

With a voice that trembles with emotion, Father Robert Weiss, himself a World War II combat veteran of the 42nd Division (Nicknamed the Rainbow Division in World War I), begins to read aloud to the assembled group of World War II, Iraq, and Afghanistan Rainbow veterans, the words of the poem "The Rouge Bouquet":

"In a wood they call the Rouge Bouquet

There is a new-made grave to-day,

Built by never a spade nor pick.

There lie many fighting men,

Dead in their youthful prime..."

Father Weiss, upon completing the reading of the somber poem, has brought tears to the cheeks of the veterans and their families assembled in New Orleans, La., where the ceremony was held last year.

The poem, originally written in 1918 by Sgt. Joyce Kilmer, a member of the New York National Guard’s 69th Infantry Regiment, which served in the 42nd Division as the 165th Infantry, tells of a heavy German artillery barrage that occurred near the French village of Baccarat on March 12, 1918.

As a result of the German barrage, 21 Rainbow Division soldiers were killed, and 14 of them were entombed in a collapsed bunker. Their bodies were never recovered.

Today Kilmer is best rememberd for his poem "Trees" .

Sgt. Kilmer’s "Rouge Bouquet " poem was so popular among soldiers in the 42nd Division, that it quickly became protocol to read it at the funerals of division soldiers when they were killed in combat during the battles of World War I.

Over 90 years later, this tradition of reading the "Rouge Bouquet" poem lives on during the Champagne Hour ceremony, which in July of 2011 will be held in Oklahoma City, Okla.

While all the division’s World War I veterans have since passed on, the ceremony continues to hold its relevancy as World War II Rainbow Division veterans age and join their predecessors in "passing over the rainbow".

The names of currently serving division soldiers who made the ultimate sacrifice in Iraq and Afghanistan are also read.

But the legacy of the poem is only one part of the Kilmer story.

On July 30, 1918, only months after writing the" Rouge Bouquet", Sgt. Joyce Kilmer, age 31, was himself killed in action near the village of Seringes-et-Nesles, France during the Second Battle of the Marne. As he joined his fallen Rainbow Division comrades in burial in the earth of France, his poem was read aloud at the gravesite.

But despite the tragedy of his death, the impact and relevance of Sgt. Joyce Kilmer on the Fighting 69th and the Rainbow Division did not end there.

Kilmer, who before joining the division had established prominence as a writer and poet, held a special place in the Fighting 69th’s heart.

As a devote Catholic (who converted later in his life) Kilmer was carrying a crucifix at the time of his death. Today that crucifix is kept as a cherished relic that continues to influence modern day commanders of the 1-69th.

The Rainbow Division’s armories are filled with collections of items that, for the most part, sit preserved in display cases and military museums. But the Kilmer crucifix does not sit statically displayed. Instead, it has been carried and worn by 1-69th Commanders for decades.

Because many of the early Fighting 69th leaders entrusted to guard Sgt. Kilmer’s crucifix have long since passed on, establishing a clear chain of possession of the crucifix back to the death of Sgt. Kilmer is difficult.

But since the 1990s, the history of the crucifix is well documented.

In 2004, the Kilmer crucifix returned to the battlefield with the 42nd Rainbow Division when it was carried by the 1st Battalion 69th Infantry Commander Col. Geoffrey Slack, during the unit’s deployment in support of Operation Iraqi Freedom.

Today, in keeping with this historic tradition, the crucifix is carried by the current 1-69th Commander Lt. Col. James C. Gonyo II .

To Gonyo, the crucifix "has a connection for the Regiment and its leaders that is concrete and sacred to those that believe in it and its history."

"When I think of the sacrifice, loss and challenges that those who have carried it have endured, it is an overwhelming feeling to know it rests near my heart," he said.

The Kilmer crucifix is publically displayed only once a year by the Commander of the 1-69th , when the unit marches in the annual New York City St. Patrick’s Day parade. Those who see it up close can attest to the signs of its age.

The small Christ figurine that adorns the cross has been worn down over the years, a product of countless patrols and battles.

Sgt. Kilmer’s crucifix is a symbol of the historic Fighting 69th and the Rainbow Division. It transcends religion and time.

"I think it is also a special memento that people remember and that connects them to the traditions that we continue to this day. I am honored to be counted among the men who have been charged with the safe keeping of this artifact that has been involved in so much of the regiment’s history", Gonyo said.