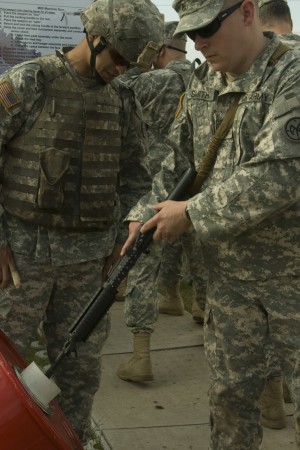 Sgt. John D. Smith, a public affairs Soldier with the 27th Infantry Brigade Combat Team, clears his weapon before entering a mess hall in Fort Drum May 29. Before deploying overseas, the 27th IBCT aims to have Soldiers learn to reflexively clear their weapons before entering a room, preferable when in safe a training environment like at Fort Drum.

But between Smith and his well-earned meal sits a squat red metal barrel, filled with sand and topped with a hole in its center.

In various forms, they are a familiar sight to Soldiers who have deployed to the Middle East, where they can be found near the entrance of nearly every building. For Soldiers of the 27th IBCT training at Fort Drum, their presence is a precursor to what they will see when deployed to Afghanistan next year.

“We want to train them as they fight,” said Lt. Col. Daniel E. Harris, commander of the 369th Special Troops Battalion, the logistics task force providing a full range of services to the Soldiers in training. “The importance of the clearing barrel is to ensure that Soldiers get used to clearing their weapon every time they enter a building. That’s very important, because that is the standard.”

Sgt. Maj. Philip Klipp, support operations manager for the 369th SB and acting safety manager, says it is important to have Soldiers learn to reflexively clear their weapons before entering a room, preferable when in a safe and training environment like the premobilization training at Fort Drum.

“If you don’t clear your weapon, there could possibly be an injury to the Soldier himself,” says Klipp, “or the Soldiers in the surrounding area.”

“Weapons can get dropped,” Harris says, “weapons can be left lying around and somebody can pick it up, and if there’s a round in that chamber -- you can just think of the ramifications from there. There is just no excuse.”

“All the training that we do is not worth one Soldier’s life,” Harris adds. “That’s my personal philosophy. If we lose Soldiers due to a lack of safety during training, in my opinion, that’s a serious lack of oversight by leadership.”

Klipp, who adds that while there are other safety measures, like the cages Soldiers put over the muzzle of their gun, clearing barrels are simple measures that prevent meaningless harm, whether in training or in a mess hall in Afghanistan.

At the FOB Orion mess hall, Smith brings his weapon to the lip of the clearing barrel. He presses the mint-sized button that releases a magazine, slides the switch that pulls the weapon to safe, and grabs the hammer-like handle to bring the weapon’s bolt to the rear. With his other hand, he activates the bolt catch, which holds the bolt back like a bow drawn fully to the rear.

Looking into the chamber of his gun, at the spot where a bullet could hide, he finds nothing. He unleashes the bolt and it slides forward with a slicing metal sound before collecting itself in one thick crash. He then places the weapon back on fire and squeezes the trigger. There’s no explosion, only a hollow click, like a single tick of an old clock. With his other hand, he sweeps the charging handle back once again, places the weapon back to safe, and takes his weapons out of the clearing barrel.

Passing the clearing barrel, Smith takes his weapon, washes his hands, and enters the tent where his repast awaits. General Tsao’s chicken is the meal of the day.