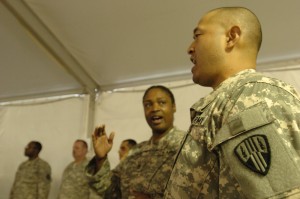 Staff Sgt. Andrea Ingram, a Poughkeepsie, N.Y., native who works supply with the 369th SB, and 1st Lt. Steven Ho, an Antioch, Ca., native and a platoon leader at the 719th Transportation Company, sing the national anthem to open a Memorial Day service at Fort Drum. The two Soldiers, while at Fort Drum, support their brethren in the 27th Infantry Brigade Combat Team prepare for a deployment to Afghanistan. (U.S. Army Photo by Spc. J.p. Lawrence.)

FORT DRUM, N.Y. -- Silence broke out in the New York Army National Guard’s 369th Sustainment Brigade’s headquarters here this Memorial Day, as all work was suspended for a moment of reflection on warriors known and lost.

The silence stood in stark contrast to the sounds expressed just moments earlier, as the ceremony began with the singing of the Star Spangled Banner by Staff Sgt. Andrea Ingram, a Poughkeepsie, N.Y., native who works supply with the 369th SB, and 1st Lt. Steven Ho, an Antioch, Ca., native and a platoon leader in the 719th Transportation Company.

After an opening prayer by Chaplain (1st Lt.) Raziel Amar, 369th SB commander Col. Reginald D. Sanders, a Springfield, Mass., native, read aloud the names of the New York National Guard Soldiers who lost their lives since last Memorial Day, with three of those names coming from the ranks of the 369th SB.

After another prayer, 369th Special Troops Battalion commander Lt. Col. Daniel E. Harris exhorted Soldiers to not only think and pay respects to Soldiers past, but also to the Soldiers all around them.

“Go ahead -- shake the hand of the Soldier next to you, and thank them for their service,” the Pocono, Penn., native said.

From there, the ceremony closed, as Soldiers around the room emerged from silence to welcome and thank their fellow Soldiers, thank them, and pat them on the back.