In a Memorial Day sendoff, family members and loved ones gather to bid farewell to members of the 107th Airlift Wing 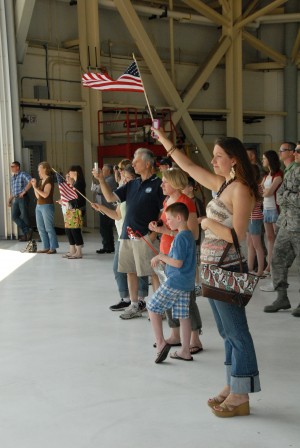 In a Memorial Day sendoff, family members and loved ones gather to bid farewell to members of the 107th Airlift Wing. The Airmen left Niagara Air Reserve Station for their four day journey aboard a C-130 that will eventually land them in Afghanistan for the start of their 90 day tour of duty. (U.S. Air Force photo/Tech Sgt. Catharine Peretta)

Instead of gathering to view Memorial Day parades, barbequing, and remembering the sacrifices past servicemen have paid, the families of 80 members of the 107th Airlift Wing gathered to say goodbye to their Airmen destined for a 90 day deployment to Afghanistan. "On Memorial Day I think it’s a tribute, actually, that we’re recognizing both not only those who have served but those who continue to serve...so I think it’s a perfect day to have them leave," said, Brenda Basher mother of Staff Sgt. Rick Basher, a deploying member. "I think it was clutch for us, to have the morning with the family and then be able to leave. I take a lot of pride not only in serving but to be able to wear this uniform today and know that I’m really going to make a difference and have an impact, I take a lot of pride out of it," said a 107th pilot who asked not to be identified. Col. Jim McCready the 107th AW Commander had these words of assurance for the families and the deployers. “To the families, these are the best trained Airmen in the world; they are the truest professionals at their business. They are going there with one sense and that sense of mission, that sense of accomplishment and that sense of bringing everyone back the same way they left. So take home with you tonight, rest assure they will be fine.” “To the deployers, I’m envious; sitting this out is probably harder than going, I wish I were there with all of you. You’re going to experience things and face challenges that you’ve never had before and when you come home you’ll have an immense sense of pride in what you’ve accomplished and you don’t lose that, it stays with you for the rest of your career, the rest of your life. Be proud of what you do, look out for each other, and God speed, we’ll see you in three months.”

Although members of the 107th have deployed numerous times in the past this will be the first major deployment for the 107th AW since converting to the C-130. As a result of the 2005 BRAC decision the wing converted from their mission as an air refueling wing flying the KC-135 to an airlift wing flying the C-130. Additionally it was mandated the 107th would associate with their collocated counterparts the Air Force Reserve’s 914th Airlift Wing. Both wings now work together flying and maintaining the same aircraft.