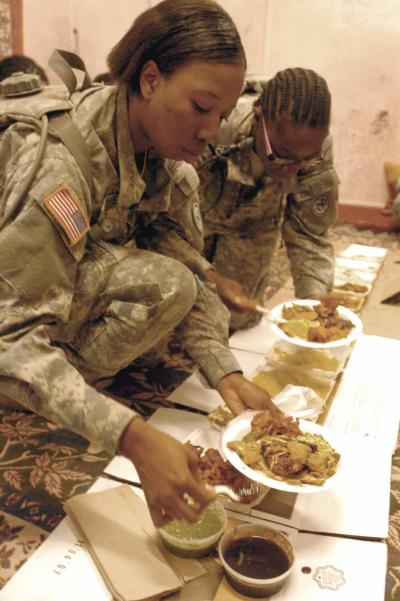 Pfc. Jolie Powell, a Queens, N.Y., native and member of the 2nd Battalion, 108th Infantry Regiment’s Female Engagement Team, learns how to dine politely during an Afghan meal during pre-mobilization training May 31 in Fort Drum. “They just said we’re supposed to speak to the women, see how they feel, if they need medicine or anything,” Powell said of the FET team’s mission during their upcoming deployment to Afghanistan.

FORT DRUM " In what will be a first for the National Guard, a group of female National Guard Soldiers will deploy to Afghanistan attached to combat units as cultural mediators.

Dubbed a "Female Engagement Team," they will travel with the 27th Infantry Brigade Combat Team, march and fight as they do, and then talk to Afghan women in an effort to understand their concerns.

“If female Afghans can be engaged, that opens up the other half of the population,” says 1st Lt. Kristen Rouse, platoon leader for the 2nd Battalion, 108th Infantry Regiment’s FET. “What the FET team offers is that we will enable the commanders to get to know the terrain of their operations in a more fair way.”

Other National Guard units have created Female Engagement Teams, but the teams being organized by the 27th BCT will deploy already attached to an infantry battalion.

Due to local custom, males in Afghanistan are not allowed to speak to females unless they are married. Because modern counter-insurgency doctrine advocates interacting and building trust with locals, military units, starting with the Marines in 2009, have begun sending females troops on combat missions as mediators.

The goal is for each FET to build relations within the various villages in their area, and to use this trust not only to find “atmospheric” intelligence on how people feel about various issues, but also to direct them to information on health concerns.

While female Soldiers had previously accompanied combat squads, what makes this unit unique is that each female is dedicated solely to the FET mission.

“Generally, it’s been as an additional duty,” Rouse, Brooklyn, N.Y., native, said. “On my last deployment, we had female soldiers, but I needed them to be mechanics, I needed them to be truck drivers. I couldn’t spare them. They had full-time jobs. So to say, I want you to do FET, too, that’s pretty hard to do and still have a functioning unit.”

Rouse’s unit currently has ten members from various units within the 27th IBCT, with plans to expand once volunteers are found. Shared among the members was a sense of humanitarian vocation. One of those volunteers said that the reason she and her sister joined came from a desire to improve the lives of Afghan women.

“We both discussed it and decided to volunteer,” said Spc. Serena Barone, an Amsterdam, N.Y., native who joined with her sister, Staff Sgt. Theresa Barone-Lopez. “I think that women in the United States have a lot of freedom and Afghan women don’t. And I want to help in some way.”

As part of their pre-deployment training, members of 2nd Bn., 108th Reg. , went to Fort Drum to take a cultural crash course on matters such as common Dari phrases and how to proper eat with one’s hands.

“They’re trying to prepare us for the culture over in Afghanistan and our expectations for what to expect,” said Spc. Mary Bobb, a Niagara Falls, N.Y., native. “I’m hoping that we’re going to interact with the Afghan females, because they don’t have voices over there. We’re hoping we can be a voice for them and express how they feel and what they want and what they’re not getting. And then we can pass that up to their chain of command.”

In addition to training culturally for their new mission, each FET Soldier received physical training to prepare for the rigors of combat missions. Endless pushups and ruck marches build the muscles needed to survive, but in order to thrive, each Soldier " all of whom entered the military in non-combat roles " must adjust mentally for battle.

“My first reaction was fear,” said Bobb of when she found out she was being placed in a FET unit. “Front-line infantrymen are trained for that kind of situation, and we’re not. I’m a truck driver. I’m not used to carrying 10-15 pounds on my back and walk 25 miles. It’s going to be a challenge.”

Rouse, for her part, said she agrees the mission will be difficult, but added that the payoff, whatever it is, will be worth it.

“It may not yield much, but it may yield a lot,” said Rouse. “There’s so much work to done, and at such great risk, but if we can go and help our units accomplish their mission of providing safety and security in our region by getting atmospherics and helping the Afghan government’s outreach, and if we can help make it better for women and their children in specific area " that’s great, too.

“We’re not there to change values,” Rouse said. “We’re going to spread outreach, and if that changes women’s minds about what women are worth or what they are capable of, if we do indirectly change the valuation of women, great. But that’s not our purpose. We’re there to support our unit’s mission, which is also to support the government of Afghanistan.

“All we can do is our little piece,” Rouse said, “and we’re going to give it our best effort.”