Troops Train for Afghan Mission in 2012 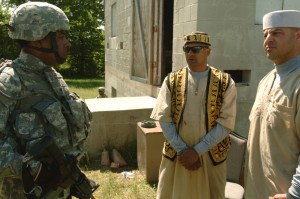 FORT DRUM, N.Y. -- Every morning, before the dew even comes up and settles on Fort Drum’s dense, sandy soil, New York Army National Guard Staff Sgt. Elias Kougemitros wakes up and gets ready for another long day. After a 4 a.m. wakeup call, a 4:15 formation, and a 4:30 breakfast, he is already at his range by 6 a.m., preparing the prop weapons and rehearsing the training scenario he will present throughout his day, which may not end until nine that night.

Kougemitros, a squad leader with the 1st Battalion, 69th Infantry Regiment, is responsible for instructing the thousands of New York National Guard Soldiers at here for training. Every day, the New York, N.Y., native, brings Soldiers on a walking patrol through a series of simulated villages. Every four hours, he watches and advises each group as they react to sniper fire, bombs at the side of the road, and uncertified journalists.

Many of the Soldiers he trains are Soldiers of the 27th Infantry Brigade Combat Team (IBCT), and many of the skills he teaches them will prepare them for possible combat in the hills of Afghanistan. And while the hours are long, the work is an honor, Kougemitros says, and he is not alone in this notion.

The “Fighting 69th” is just one of an army of units at Fort Drum working tirelessly to help the 27th IBCT prepare for their upcoming deployment.

As part of a joint effort by every major component of the New York National Guard, the 369th Sustainment Brigade (SB) and the 42nd Infantry Division Headquarters are taking charge of training and sustaining so that the Soldiers of the 27th IBCT are allowed to focus on learning.

“This is the first time that all the units in the state of New York converged to assist a deployment such as this,” says Col. Reginald D. Sanders, a Springfield, Mass., native and commander of the 369th SB.

“This is a full-force effort by the New York National Guard,” says Lt. Col. James Gonyo, commander of the 69th Infantry and the training task force. “The brigade walks in; they get trained. They don’t have to worry about how they’re going get to somewhere or how they’re getting food; they show up on time, in the right uniform, and we do everything else for them.”

For Soldiers, training starts from the moment they first see their bunks. Every morning, Soldiers wake up to a world of big white circus-like tents with stiff green cots, showers in shipping containers, and clearing barrels at every door. This is the world of the Forward Operating Base, the first of its kind in the New York National Guard. Dubbed FOB Orion, the base is a familiar sight to those accustomed to deployments in Iraq or Afghanistan, but a strange new world to others.

“If Soldiers have never seen a FOB before, it is kind of a foreign concept for exactly what a FOB can provide,” says Lt. Col. Brian Marshall, a Mansville, N.Y. native and deputy commander of the 369th SB. “We built a FOB here so Soldiers can now see what that is, they know what services are available, and it also takes away some of the fear of the unknown.”

Marshall works with the 369th SB to ensure the 27th IBCT -- the unit he served for 15 years -- gets the training it needs. Marshall served on the last 27th IBCT deployment to Afghanistan in 2008, and he says the lessons learned then helped shape the training today. One of those lessons became the FOB, and the other became enlisting other units to take care of the 27th while they train.

“We looked at that and said, ‘you know, trying to train as well as maintain ourselves administratively just doesn’t work,’” Marshall, a Mansville, N.Y., native says. “If the Soldiers who are going through training could concentrate on just training, and not have to worry about sustainment, the logistical support, the administrative support, they could concentrate on what they have to do.”

For the 369th SB, the famous legacy of the “Harlem Hellfighters,” that means supply and maintenance. If Soldiers need more rounds for their weapons, if Soldiers need another water truck while they’re marching through knolls and groves, it is important to deliver these shortfalls before the Soldiers even know they exist, says Lt. Col. Daniel E. Harris, 369th Special Troops Battalion commander.

“When we don’t deliver, there is a war fighter out there who is going without,” Harris, a Pocono, Pa., native, says. “Whatever happens, come hell or high water, we’ve got to get those war fighters what they need, before they ask for it.”

Behind all this, Harris says, is the simple idea that once Soldiers’ basic needs are taken care of, they can focus on the training that will keep them alive.

That training is handled in the forests and fields of Fort Drum, where the Soldiers of TF Train can be found in the early morning hours and in the late, late night. Working with New York’s Pre-mobilization Training and Assistance Element, the Soldiers of TF Train toil behind the scenes to ensure that their training scenarios are realistic and relevant. For instance, the trainers enact a sort of play for Humvee patrol training, complete with script and actors and props.

“Soldiers have a vehicle and they’re have to determine if it has an IED,” explains Spc. Luis Munoz, a trainer at the Humvee range. “Then, a group of civilians bring in an injured person, supposedly shot by the Americans. All of a sudden, a riot breaks out.

“How are they going to handle that situation? You have about five trucks, with 27 Soldiers, going out the wire, and there’s about 15 people outside, angry about not getting medical assistance.

“At the same time, there’s a sniper, who’s firing off shots, to see if the Soldiers will take cover or just start laying on rounds on top of those civilians.

“A lot of them succeeded in not shooting,” Munoz proudly says, adding that scenarios like this are what will prepare them best. “Every scenario somebody’s been through, or somebody’s seen it. If this happens again, they know what to do.”

In addition, the scenarios allow each trainer to place their own sping on the basic script. “You can say, ‘Squad leader, what are you doing here? What’s going on?’ And you can use your experience in-country to give them an idea of what they’re working on,” says Kougemitros, who deployed to Iraq and Afghanistan.

“I’m proud to share my knowledge,” Kougemitros says, “being able to help them see what they don’t see. Really push down at every level, everyone one of them realizing that they’ll be on convoys, they’ll be on patrols with infantry, and they have to know how to become part of the team. Because the quicker they can become part of the team, the more successful the mission is going to be.”

At Fort Drum and on FOB Orion, it takes teamwork to successfully prepare warriors for deployment: the 27th IBCT to become able warriors, and the rest of New York to provide the safety net to allow their brethren in arms to focus on that goal.

“This is truly a joint effort. Every subordinate unit within the New York National Guard had a piece of it,” says Marshall. “There really is not one entity that made this happen. It was truly a state effort. One unit could not have done this by themselves. It took the entire state.”

“I look out there all see all these faces I known over the years. I see these Soldiers as my kids, as my brothers,” Gonyo, who foresees future joint training, says. “When I look at the quality of the training that we provided, and the amount of time that we work them, it’s to make sure that whatever happens -- and we know something bad could happen -- it’s not because we didn’t do the right thing.”

At Fort Drum, doing the right thing means working hard and sleeping quickly. But for Kougemitros and Munoz and Gonyo and the others who worked to prepare the 27th IBCT, if those Soldiers have a more successful deployment because of their efforts, then that is a success those Soldiers can sleep well upon.