Training with Faith, Care and Concern for Troops 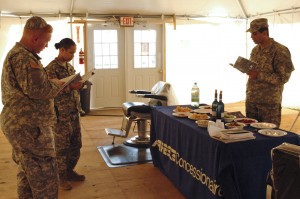 Chaplain (1st. Lt). Raziel Amar of the 369th Sustainment Brigade holds a Jewish service for the beginning of the Sabbath June 3 at Fort Drum. Pfc. Isabel Polanco, a New York, N.Y., native, and an administrative specialist with the 369th SB, and Pfc. Daniel Miller, an Eerie, Penn., native and a cavalry scout with 2nd Battalion, 101st Cavalry, hold the prayer books, which read right to left. (U.S. Army Photo by Spc. J.P. Lawrence)

FORT DRUM -- On Andrew Ayers’s uniform, there are the markings of a modern New York Army National Guard Soldier: velcro pockets and an American flag, camouflage in proud digital green and grey, and dirt, hard-earned from a day’s training. As the Mexico, N.Y., native and his fellow Soldiers complete this day of pre-deployment training here in early June, they ready to storm and clear a room.

Ayers goes with them, and completes the training as they do, but he does it in a way that is fundamentally different from his fellow Soldiers.

On Ayer’s uniform is something that distinguishes him from his fellow Soldiers: a solid black cross stuck above his name, the emblem of a U.S. Army chaplain. When Chaplain (1st. Lt). Ayers of the 27th Infantry Brigade Combat Team goes to train with his fellow troops, he cannot, in accordance to military non-combatant law, carry a weapon, but he participates in training -- goes crawling through the mud, marches through bogs and creeks -- anyway.

The reason why Ayers and his fellow chaplains do this is one of empathy. With a deployment upcoming, Chap. (Maj.) Alexander Knowles, 27th Brigade chaplain, expects his chaplains to be able to emphasize with their Soldiers, and know what is like to walk a mile in their desert sand combat boots.

“I expect my chaplains to go up those fight lanes just like their Soldiers do,” said Knowles, a native of Wilson, N.Y. “That’s where they should be, with their Soldiers. So even though they go without a weapon, they’re still doing the hill.”

The chaplain corps, established in 1775, provides Soldiers with ordained clergy for their religious, counseling, and moral needs, whether in peacetime or war. Recently, clergy have also been used to connect to religious leaders in Iraq and Afghanistan, as well as to make sure Soldiers are financially and legally prepared for combat.

“Nurture the living, care for the wounded, and honor the dead,” 1st. Lt. Raziel Amar, a Brooklyn, N.Y., resident and Jewish chaplain, said of his mission. For Amar, who moved from Israel to the United States at age 20 and joined the military after September 11, 2001, the chaplaincy occupies a special place in military life as a helpful ear, outside the chain of command. “If I help someone with their problems, I feel like I’m doing my job.”

And yet as Soldiers, chaplains must build rapport with their troops. “There’s no exceptions for my chaplains,” Knowles said. “No privileges. The Soldiers are out there getting cold and muddy; the chaplain should be out there getting cold and muddy. That’s important to support the mission: to learn what the Soldiers go through, to know what’s going on, to experience their experiences.”

This was a mandate well-accepted by Ayers, who was previously an enlisted Soldier. During his training, Ayers said he has cleared rooms, walked patrols, and administered first aid, although at the firing range he mostly encouraged others.

“I wanted to be with the guys, and I wanted to get to know them,” said Ayers. “You want the knowledge to understand the context of what you’re faced with. You want to understand what they’re going through. The adrenaline. The fear.”

And then in a flash of movement, each Soldier bursts into the room, reacts to danger, or scrambles to fulfill their prescribed duty -- and Ayers follows them.