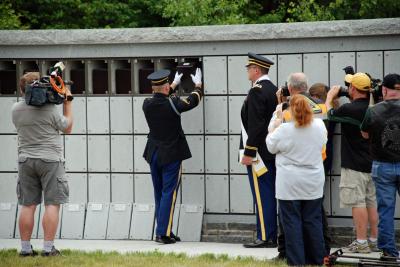 SARATOGA NATIONAL CEMETERY, SCHUYLERVILLE -- Members of the New York National Guard Military Forces Honor Guard led a joint service program on June 10th rendering military honors for 11 deceased veterans and one spouse whose unclaimed remains have been stored in funeral homes in some cases for decades.

The ceremony was run by the Patriot Guard Riders of New York with the cooperation of the Gerald B. H. Solomon Saratoga National Cemetery in Schuylerville.

The Saratoga National Cemetery’s Honor Guard provided the Color Guard, firing party and bugler. Dozens of Patriot Guard Riders and other veterans were also on hand.

The Veteran Recovery Program is the result of a cooperative effort between the Patriot Guard Riders of New York and the New York State Funeral Directors Association to change rules and regulations that were preventing the honorable internment of forgotten veterans’ remains that have been kept in storage at funeral homes and morgues across New York.

“Today we honor our forgotten veterans. Veterans without families,” said Bill Schaaf, assistant state captain for the Patriot Guard Riders of New York, who served as the master of ceremonies. “Today all of us that are here are their families.”

According to Schaaf, the VRP now permits New York State funeral directors to participate in the research necessary to find and inter forgotten veterans. The estimated number in New York is about 2,000. Now other similar ceremonies are planned in our regions in New York.

The June 10th ceremony was the first under the new law and military honors were rendered for three U.S. Army, three U.S. Marine Corps, three U.S. Air Force and two U.S. Navy veterans. The date had been chosen to coincide with the annual “Americade” celebration which brings thousands of motorcyclists to the nearby Lake George area.

The day began with a Patriot Guard motorcycle procession escorting the hearse to the cemetery from the Flynn Brothers Funeral Home in Schuylerville. The cremated remains were contained in urns inside the hearse. At the cemetery, service members were paired with veteran volunteers who took each urn and a folded American Flag from the hearse. They marched in formation to the tune of a bagpiper and the urns and flags were placed on covered tables for the invocation, remarks and dedications portion of the program.

During the ceremony the names of the deceased were read aloud, one flag was opened and refolded, a firing party fired three volleys and “Taps” was played.

Then service members representing each of the branches took up the urns and placed them in designated vaults.

“In our nation we have many customs and many faiths,” said Chaplain (Colonel) Eric Olsen, State Chaplain for the New York National Guard. “But those who stand in the services stand for them all. Today we remember those who put self aside and rose to the call to serve our nation,” he said. “We are blessed to have them as part of our pilgrimage on earth.”