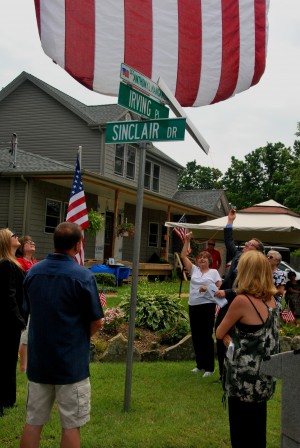 Constance Mangano of Greenlawn, NY, with the help of Huntington City Council member Mark Cuthbertson unveil the newly named street named after Constances’ deceased son Anthony Mangano. This street was dedicated in the memory of Spc. Anthony L. Mangono on the third year anniversary of his death in Kandahar, Afghanistan. He was with the 1-69th Infantry Regiment, but deployed as an attachment to the 2nd squadron, 101st Calvary in 2008. Photo by Sgt. Tamara Gabbard, 42nd Infantry Division.

GREENLAWN, N.Y. -- “The blood of fallen Soldiers waters the tree of liberty,” appear in the end of a letter written by New York Army National Guard Spc. Anthony L. Mangano prior to deployment with the 2nd squadron, 101st Calvary in 2008. The words were once again uttered by Mangano’s best friend Vincent Sirago, a Deputy Sheriff f in Saratoga, N.Y. here in Mangano’s hometown June 21 during a memorial street dedication to mark third year anniversary of his death. Mangano died June 21, 2008 in Kandahar Afghanistan with four other comrades when their vehicle encountered an improvised explosive device and small arms fire. “You always hear the statement that Soldiers are never forgotten,” said his mother Constance Mangano, “and I believe that this is just another way to keep that true.” The dedication was held to rename the street that Mangano’s mother lives on, Irving St. The street is now named Sgt. Anthony L. Mangano Way. “It is never easy,” she said as tears filled her eyes, “you know, you think, it’s been three years and I can discuss it, but the pain of losing your son never goes away.” After her loss Connie, as they call her, became part of the American Gold Star Mothers. Through the efforts of this long established group of mothers, events like this have been made possible. The Gold Star Mothers started in WWI by Grace Darling Seibold, after she had lost contact with her son who was serving under an aviation brigade. After loosing contact with her son, she began visiting the hospitalized veterans in hopes that she would recover him. Grace, realizing that her grief was becoming self-destructive, devoted her time and efforts to, not only working in the hospital, but extending the hand of friendship to other mothers dealing with the same heartache. “Today, what I try and do is to make sure that every veteran is not forgotten, whether they are alive or deceased,” said Michele McNaughton, Chapter 61 President of the American Gold Star mothers here on Long Island. “And you really come to [build relationships] with all the families this happens to.” Michele lost her son, Staff Sgt. James McNaughton of the 306th Military Police Battalion, August 2, 2005. “So basically we are support for one another,” she continued. “Because no one can really [walk in our shoes] and understand what we go through. We are all somebody that lost a child in a war, so it is important to have that support.” With the support of her ladies and the town of Huntington, Connie humbly unveiled the sign under a larger than life American flag that the Huntington Fire Department rigged high over the crowd of veterans and family as a distinction of there gratitude for not just Anthony, but all fallen Soldiers across the United States. “This dedication is bittersweet,” said Glenda A. Jackson, a member of the Huntington City Council. “It is bitter that he paid the ultimate sacrifice so that we all could enjoy our freedoms, and sweet is the acknowledgement of that sacrifice and how we will remember and recognize [his death] as a continuation of freedom across New York.” “Everything is good,” said Connie. “That is what I would tell him if I could see him right now.”