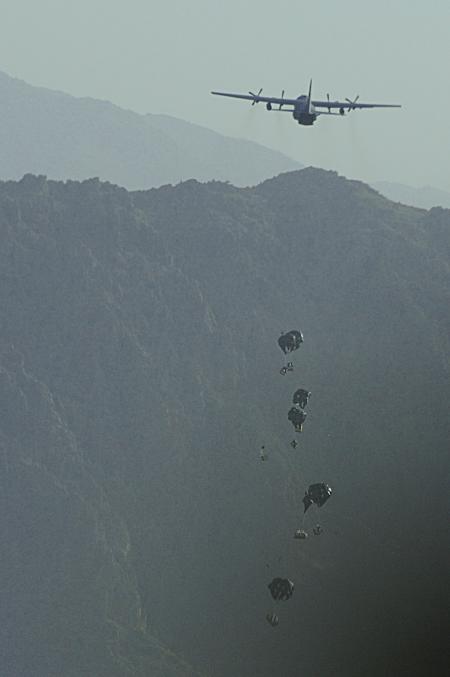 A C-130 Hercules from the New York Air National Guard’s 107th Airlift Wing airdrops much-needed supplies to a forward operating base in Oruzgan province, Afghanistan, June 22. The New York ANG C-130 flew the airdrop mission in conjunction with another C-130 from the Alaska ANG. Airdrops help mitigate the danger of transporting supplies via convoy.

BAGRAM AIR FIELD, Afghanistan - Soldiers in an austere province in Afghanistan received much needed provisions thanks to the joint efforts of the Alaska and New York Air National Guard units during their first formation airdrop.

Members of the 774th Expeditionary Airlift Squadron dropped approximately 20,000 pounds of cargo to soldiers on the ground in the Oruzgan province June 22. The aircrews were tasked to perform two back-to-back missions, which tested their skills and strengthened them as a team.

Despite having air crews from two separate Air National Guard units, they had one mission in mind - getting supplies downrange to combat forces on the ground.

"We delivered about 10 containers per aircraft at about 1,000 pounds per container," said Master Sgt. Timothy Griffin, a C-130 loadmaster from Buffalo, N.Y. and a member of the 107th Airlift Wing. "I ensured the cargo was balanced, so the weight was distributed evenly on the aircraft."

Griffin worked with the Army riggers at Bagram Airfield to prepare cargo pallets for the drop using the Improved Container Delivery System.

"The system enables accuracy by adjusting to wind data, terrain and other vital information affecting the airdrop," said Capt. Tom Bradford, an active-duty C-130 navigator from the 39th Airlift Squadron at Dyess Air Force Base, Texas. "The ICDS collects data so aircraft speed and altitude can be adjusted."

Bradford provided his airdrop expertise to ANG aircrews and served as an extra set of eyes on the flight. He also operates as continuity between ANG units completing 90-day rotations in theater demonstrating the Total Force concept.

"It’s challenging to work with different aircrews, but one benefit is learning how people do things differently," said the Eighty Four, Pa., native. "I’ve been deployed to this area twice, so I advise them about various aspects of the drop zones."

There is an inherent amount of risk when flying during the daytime, that is doubled when flying more than one aircraft to the drop area, said Lt. Col. Chris Thurn, C-130 pilot and mission commander.

"These types of missions are typically flown at night," he said. "The second aircraft had to perform fluid travel maneuvers from the 3 to 9 o’clock positions to mitigate threats and keep from becoming predictable."

Exercises and training is a huge aspect of Thurn’s work back at his home station. This helped his team perform flawlessly during the airdrop.

"As an instructor pilot and evaluator pilot, I put a lot of emphasis on training to make sure we are prepared," he said. "It’s the long-term effects of what we do on a daily basis that makes a difference. If I can help those on the ground, I’m proud to do this."

"We take pride in doing this, because it keeps people from having to drive in convoys. Airdropping supplies, keeps people out of harm’s way and keeps war fighters in the fight."