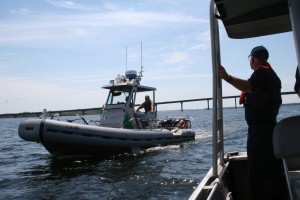 ROUSES POINT, N.Y. -- For the third time in four years, Sailors of the New York Naval Militia will assist the United States Border Patrol inspecting pleasure craft entering the United States from Canada on Lake Champlain during the months of July and August.

Over five consecutive weekends from July 15 through August 14, a Naval Militia boat and two-man crew will join Border Patrol Agents in inspecting boats entering the United States at Rouses Point, Clinton County; and directing them to Customs and Border Protection inspection station.

First out on the water were Petty Officers Jeff Alexander of Berne, N.Y. and Robert Hill, from Grafton, N.Y. The two arrived on Friday, July 15 and were immediately tasked with boater intercept to help guide local boaters to the customs inspection station.

“These guys are our extra eyes and ears out on the water,” explained Chief Erik Hipko from the Border Patrol. “They are an incredible boost to our capability here.”

The Naval Militia mission is just one part of the interagency effort to keep the waterways safe and secure, Hipko said. Local law enforcement, the New York State Police, the Coast Guard, Border Patrol and Naval Militia all play vital roles and partner to meet the demands of summer travel on Lake Champlain.

“Friday was a good start for us,” Hill said. “Our boat was the first craft available to the Border Patrol and the numbers (of boaters) weren’t too bad. We expect much more now that the weekend is here.”

The Border Patrol routinely mounts operations during the summer to remind boaters of the need to check-in as they enter the United States. More than 2,000 boats make entry into U.S. waters from the Richelieu River into Lake Champlain each summer. During the peak boating season and high traffic periods of summer weekends, an estimated 100 to 150 boats will pass through the border daily.

The Naval Militia crews on Patrol Boat 221,--a MetalCraft Marine Kingfisher 22 foot Hardtop boat -- team with Border Patrol Agents to meet with visiting boaters that do not report, explain the inspection process and direct them to the customs station, in partnership with law enforcement agents on personal watercraft.

The support on the waters of Lake Champlain allows the Border Patrol agents to better manage the flow of boaters passing through the inspection station and respond to other safety and security needs on the lake.

Throughout the day, a steady stream of boaters heading south from the Canadian side of Lake Champlain near the Richeleu River approached the Naval Militia patrol boat, a visible presence on the waters of Lake Champlain to adhere to the Border Patrol inspection point.

In order to sustain the month-long mission, four additional Naval Militia crewmembers will rotate with Alexander and Hill over different cycles to improve boatswain’s training.

"Our partnership with the New York Naval Militia continues to be a force multiplier for the U.S. Border Patrol and our efforts to keep waterways of Lake Champlain safe for everyone," said Chief Patrol Agent John Pfeifer. "Their participation allows us to better use our own agents in other regions of the lake and increase border security across our area of operations."

"Partnerships like this one with the NYS Naval Militia show some of the best ways to use state and federal resources," Pfeifer said.

The New York Naval Militia is a component of the New York Military Forces commanded by the Adjutant General, Major General Patrick Murphy. During the joint operations the Naval Militia members are in State Active Duty status, work at the direction of Gov. Andrew Cuomo and will be paid by the State of New York. The Naval Militia is composed of about 2,000 members of the Marine Corps, Navy and Coast Guard Reserves who agree to perform state missions when needed at the order of Gov. Andrew M. Cuomo, as well as a small group of retired reservist members.

The Naval Militia maintains a fleet of nine patrol boats in its Military Emergency Boat Service (MEBS) which support law enforcement agencies, the United States Coast Guard and other federal agencies. The Naval Militia works regularly with the United States Coast Guard in New York Harbor, carrying inspection teams out to ships waiting offshore to enter the harbor about Patrol Board 440, a state-of-the-art patrol boat.

“You guys just don’t know how much we appreciate these missions and this support,” said Border Patrol Agent James Sherman as the number of boaters on Saturday, July 16 increased throughout the day. “In the past, we just didn’t have the ability to respond as we do now. We love you guys for being here.”