June 18, 2021 | 12:35 pm COVID-19 Updates
The COVID-19 vaccine is here. It is safe, effective and free. Walk in to get vaccinated at sites across the state. Continue to mask up and stay distant where directed.
Get the Facts

Can You Hear Me Now? Guard Troops Ensure You Can During Disaster Exercise 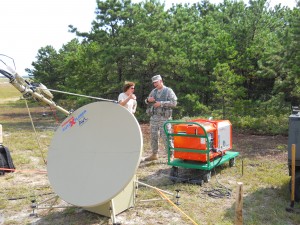 F.S. GABRESKI AIR NATIONAL GUARD BASE, WESTHAMPTON BEACH, N.Y. -- A New York National Guard disaster response exercise here Aug. 4-7 dismissed any doubts to whether the Army Guard’s 42nd Infantry Division Headquarters was prepared to respond to a hurricane on Eastern Long Island. A joint training exercise with the 106th Rescue Wing at Westhampton Beach helped prepare members of the New York National Guard train and rehearse one of the most important aspects of military operations: communications.

Airmen from the 106th Rescue Wing, along with additional Air National Guard communications specialists from the 105th Airlift Wing from Newburgh, N.Y. and the 174th Fighter Wing in Syracuse, N.Y. joined with signal Soldiers from the 42nd Infantry from Troy, N.Y. and the Joint Force Headquarters -- New York signal staff to establish a full suite of emergency communications at a forward location during the command post exercise.

“Our purpose here is to work out the kinks,” said Pfc. Kashif Mayes, a satellite operator maintainer with the 42nd Infantry Division Special Troops Battalion, based in Troy.

“We can deploy in about 15 minutes with the Mobile Emergency Response Center (MERC) system,” said Spc. Daniel Hayes, also with the 42nd STB. Hayes served as a communications support specialist during the exercise.

MERC is a completely self-sufficient mobile communication network. It provides commercial telephone and Internet access at remote sites. After a disaster, such as the simulated hurricane on Long Island, most commercial communications are unavailable.

“This is good cross-training,” Hayes said. “It’s the first time I’ve worked with the Air Guard on an exercise.”