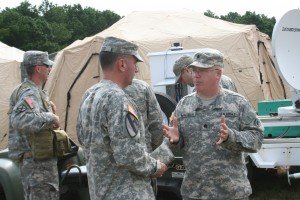 F.S. GABRESKI AIR NATIONAL GUARD BASE, WESTHAMPTON BEACH, N.Y. -- New York National Guard Soldiers from the 42nd Infantry Division Headquarters left their armories from across the state to converge at an empty field Aug. 5 here in an exercise meant to mimic the Guard’s hurricane response efforts.

Within hours of alert, 379 soldiers and 41 tactical vehicles scrambled to the base and assembled a working division headquarters, capable of commanding the response to a natural disaster or terrorist attack.

The exercise, named Operation Rainbow Hurricane, may prove useful to the headquarters of the 42nd Infantry Division. The unit, now serving as lead of the National Guard’s Domestic All-Hazard Response Team East, may be called to quickly deploy in support of a natural disaster or terrorist attack to any state east of the Mississippi.

While the public is very familiar with image of National Guard Soldiers filling sandbags or distributing food during a disaster, the creation of DART shows a shift in how the National Guard approaches domestic operations, said National Guard Lt. Col. Patrick Macklin, 42nd Inf. Div. DART coordinator. Macklin, who also serves as the division’s deputy operations, said the events of 9/11 and Hurricane Katrina showed that disaster response requires brains as well as brawn -- preparation as well as manpower.

“During Hurricane Katrina, we had all these troops, and no one was in charge,” Macklin said. “All of the adjutant generals got together and said, our response to natural disasters needs to get better.”

“Just throwing 56,000 Soldiers at a disaster area? That’s no good,” said Sgt. 1st Class Denis Topliffe, intelligence sergeant with the 42nd Inf. Div. “We want those troops to have the proper equipment, with the right food and the right mission under the right command, because that’s going to save lives -- and that’s what it’s all about.”

As part of DART, eight National Guard division headquarters divided into east and west teams, rotate responsibility for quick deployment to disaster areas. For instance, from Oct. 1, 2010 to Sept. 30, 2012, the headquarters of the 42nd Infantry Division may be called to assist in any calamity in the 26 states east of the Mississippi, as well as the District of Columbia and two territories.

The basic function of DART is to supplement the resources already within a state’s response, if needed. The National Guard command and control capability is able to plan and identify additional forces to assist a state or command a joint task force for a state governor if necessary.

“We don’t take over; we come in to supplement their headquarters,” Macklin said. “If a governor finds that his National Guard command needs more help, he activates DART East. That means that the 42nd Infantry Division Headquarters, with little or no notice, packs up their tents and their equipment and goes to Florida, or Virginia, or Louisiana.”

Macklin said training such as Operation Rainbow Hurricane proves the 42nd is capable of achieving such a mission. Macklin, who responded to the events of 9/11 as a New York City police officer and as a National Guard Soldier, said the effort follows in the footsteps of those who responded to the events of 9/11, when within 10 hours, three battalions of Guardsmen had formed a perimeter around ground zero.

“9/11 opened our eyes to the importance of domestic operations,” Macklin said. “We are a force that is expeditionary both overseas -- and in the continental United States.”