Driving Above the Flood and the Mud 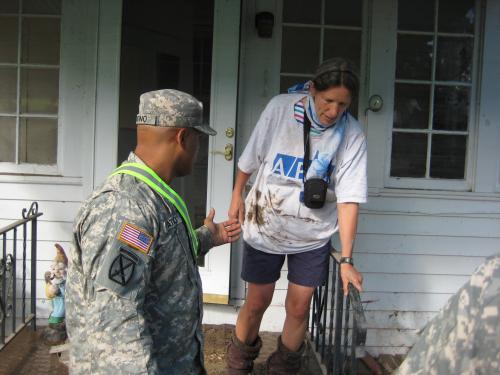 New York Army National Guard Soldier Sgt. Windollyn V. Patino helps a woman from her Schoharie N.Y. home, where mud and debris from Hurricane Irene floodwaters had trapped her for two days. Patino is a motor transport operator with the 719th Transportation Company.

Soldiers of the company, based in Harlem, are among the 2,500 New York National Guard Soldiers and Airmen New York Governor Andrew Cuomo mobilized in response to the landfall and aftermath of Hurricane Irene, which has caused deaths, destruction and disarray in other states along the east coast.

Some of that disarray occurred in Schoharie, N.Y., where flooding damaged streets and trapped people in their homes. Soldiers of the 719th Transportation Company took to their trucks to help out.

"Whenever I’m needed and wherever something is happening, I want to be there," said Sgt. Windollyn V. Patino, who is motor transport operator with company. "That’s what I’m here for."

Guided by a local police officer, company Soldiers in a four-vehicle convoy of Light Medium Tactical Vehicles (LMTVs) drove the streets to find trapped citizens in need of help. A high-axle vehicle, the LMTV truck can ford deep water and operate in cross-country terrain.

Trolling the streets at around fifteen miles per hour, Patino continuously honked his vehicle horn.

"I wanted to make sure people could hear me so they could scream out of their windows for help," said Patino.

The honking appeared to pay off as a woman yelled out to the Soldiers from the upper floors of her house.

"We found one lady, who was around 50 years old, screaming and crying for help, so we moved right away to get her out," said Patino. She had been trapped in her house for two days.

The woman threw her personal belongings down to Patino and his fellow Soldier, Pfc. Daniel Paul, who is also a motor transport operator with the company. She then proceeded downstairs for Patino’s help.

Though the front doors of the house were stuck shut by mud and debris, Patino managed to kick them open, rescue the woman and get her to safety.

"That experience made me feel good, I feel like we’re here for something," Patino stressed. "We’re here to help the people."

After getting the woman to safety, Patino and the rest of the Soldiers continued to roam the streets, looking for more people to rescue. Local civilians, fire fighters and other supporting organizations thanked the Soldiers of the 719th Transportation Company.

As did New York Governor Andrew M. Cuomo, Maj. Gen. Patrick A. Murphy, the Adjutant General of New York and Brig. Gen. Michael C. Swezey, Commanding General of the 53rd Troop Command, who arrived in helicopters to visit Schoharie. The entourage saluted the Soldiers and shook their hands.

"He was pretty cool," Patino said of Cuomo. "He said he was thankful for us being there."

When the visited ended, more Hurricane Irene recovery awaited the Soldiers, including streets cracked, cratered and demolished by flood waters. Local police assigned Soldiers to block the roads so no one would get hurt or killed, said Sgt. T’angelo J. Magee, a company motor transport operator.

"We had to set up off-set vehicle barricades for safety reasons," Magee said.

Local civilians thanked them a great deal, Magee recalled. When the civilians found out the Soldiers came from New York City, they joked that they’d made a long commute to help out, he added.

"I told them that we are the New York Army National Guard, we’re here to help people and defend those who can’t defend themselves," Magee said.

Patino said he has a wife who is eight months pregnant, and a daughter who is just turning four years old. His daughter was crying and did not want him to go, he added, so he told her why he had to go in a way she could understand.

"Baby, I have to go help families and people out there who need my help," said Patino, reiterating what he explained to his daughter. "I need to take them to safety so they can be just like you -- good, in a nice environment and warm blankets."