November 30, 2020 | 3:21 pm Information on Novel Coronavirus
Coronavirus is still active in New York. We have to be smart. Wear a mask, maintain six feet distance in public and download the official New York State exposure notification app, COVID Alert NY.
Get the Facts 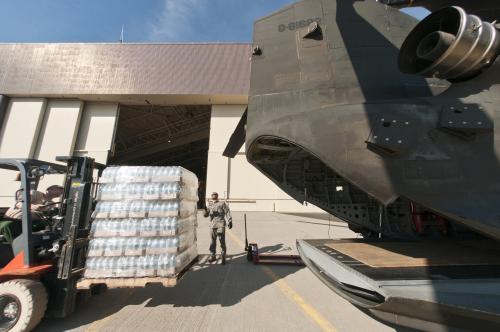 New York Army National Guard Aviation units have logged 150 hours of flight time and transported 60,000 pounds of food and water to isolated mountain towns and central distribution centers as state officials continue to respond to the aftermath of Hurricane Irene.

The first flight of New York Army Guard aviators occurred on Sunday, August 28, just after the brunt of the storm passed over the state . Aviators flying from the Army Aviation Support Facility at Albany International Airport flew south into Greene County to see if they could assist in rescuing people in the town of Prattsville who were stranded by rising flood waters. The stranded civilians were rescued before the helicopters were needed that night.

At first light on Monday, August 29 the Citizen Soldier Aviators of Task Force Aviation began flying surveillance missions so that state officials could begin to assess the impact of the storm. On both Long Island, where Hurricane Irene first hit, and Catskill Mountain towns where small creeks became raging rivers, the Guard UH-60s provided eyes in the sky.

In a joint operation three New York Air National Guard HH-60 Pavehawk search and rescue helicopters, which had been evacuated from their base on Long Island to escape the storm, were dispatched to Schoharie County to conduct search and rescue missions if necessary.

On Tuesday and Wednesday, August 30 and 31 the aviators began hauling food and water.

At Belleayre, UH-60s from the Albany flight facility picked up water and food and airlifted them into Margaretville, Prattsville, Middleburgh, and other Greene and Schoharie County mountain towns which were not easily accessible by road.

Other flights carried food and water donated by the Regional Foodbank of Northeastern New York. Soldiers packed the UH-60s full of food and bottled drinks and sent them on their way.