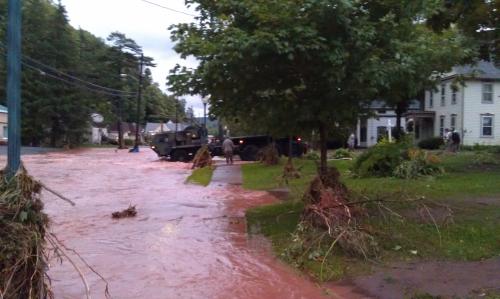 The unit was staged with others at Camp Smith and Kingston, N.Y., facilities ahead of the storm’s landfall. When flooding occurred in Windham and other communities, Soldiers were sent to aid civil authorities.

Just getting to the Emergency Operations Center near Windham proved a challenge. The company tried two or three times, using trial and error, to find an un-flooded route, said Capt. Daniel Colomb, company commander of 1156th Engineer Company, which is based in Kingston and Camp Smith.

The devastation was incredible, he recalled. The main street of Windham was virtually a river, and the floodwaters were strong enough to carry away cars and trailer homes, he said.

"I’ve never seen anything of this magnitude before," he said.

Assigned to rescue trapped civilians in Windham, the Soldiers had to get out of their vehicles, lock arms, enter the sometimes waist-deep water, and use baby steps to find safe fording sites free of drop-offs or other hazards, Colomb said. He described the delicate operation as "searching with our feet," and "hands across the river."

Once across these areas, the soldiers began to search for residents. They were guided by local authorities and some citizens, who pointed out where people were trapped, Colomb said.

The trapped people were happy to see the Soldiers and others coming to help, Columb said, and sometimes took personal belongings with them. The Soldiers occasionally had to carry residents to their vehicles before driving them to higher ground, he explained.

Soldiers also encountered a family who were endangered by fuel-laden floodwaters in their home, but didn’t want to leave, he recalled.

Though the family had taken refuge in their attic, the flood had floated their fuel-oil tank and carried it toward the house where it crashed through the window and began to leak, he said. The Soldiers managed to convince the family to come down from their attic to be rescued, he recalled.

"We saved their puppy too," he said.

They also rescued a man recovering from surgery, and their medic cleaned his wounds and made sure he was alright before they took him to a medical facility, Colomb said. He described the Windham residents as courageous.

"The town was coming together," he said. "Everyone was helping everyone else out."

Working with the local authorities was a great experience, and the morale of his troops remains high, Colomb said.