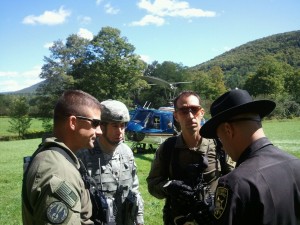 The two Soldiers, who belong to the 42nd Infantry Division, were among the 2,500 New York National Guard Soldiers and Airmen New York Governor Andrew M. Cuomo mobilized in response to the landfall and aftermath of Hurricane Irene, which has caused deaths and destruction in other states along the east coast.

"The devastation is incredible," said Lt. Col. Matthew Tully, a member of the 42nd Infantry Division. "Thousands are without power and fresh water. The National Guard has organized a task force to help these people."

The group of civilians -- which included a pregnant woman, four children and a man recovering from heart surgery -- were at a hunting camp near a shallow creek in Jewett, N.Y., Giordano said. They had parked their cars on the opposite side of the creek, and planned to leave the camp and cross the creek to their cars via a fording site, he explained.

But heavy hurricane rains and floods transformed the creek from a trickle into a torrent, trapping them.

Thiem, Giordano and DelVecchio were driving through Greene County assessing storm damages on Aug. 29 when the county Emergency Operations Center contacted them with a report about the civilians around mid-morning.

"We immediately linked up with the deputy sheriff to assist in any way we could," he said. Floods had made bridges impassable as well, forcing them to continue the search on foot, he added.

They spotted the civilians while trudging along a path by the creek about an hour later, Giordano said. The creek, however, was a muddy deluge which had brought down huge trees and picked up about a dozen cars, washing them up against its banks, he recalled.

"It was a mixed blessing," he said of finding the civilians. "We could see them, but we couldn’t get to them and we couldn’t hear them. We used hand and arm signals to exchange phone numbers, and we were then able to communicate."

He coordinated the evacuation of the civilians via a New York State Police helicopter, Thiem said.

"The helicopter was able to make four trips within two hours of the initial assessment of the situation," Thiem said. "There were no incidents and everyone made it out safely."

Thiem said he enjoyed working with the sheriff’s deputies and state police.

"Everyone was very focused on rescuing these folks, and we worked as a team to get the job done," he said.

It was a great experience to work with the National Guard, DelVecchio said.

"You guys are very professional and we are glad you are here," he said.

The New York National Guard is there to help its neighbors, Giordano stressed.

"In an operation like this, everyone does everything," he explained. "You do what needs to get done."