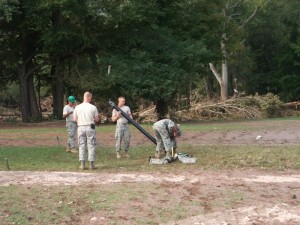 New York Air National Guard Airmen of the 174th Fighter Wing JISCC Team install an antenna. mount near the Emergency Operations Center in Prattsville, N.Y. to provide a communications infrastructure to first responders and flood victims in the area.

Using their Joint Incident Site Communications Capability (JISCC), equipment a half-dozen Airmen of 174th Fighter Wing’s Communications Flight provide phone and internet access for civilians hit hard by flooding which occurred in the wake of Hurricane Irene, and the emergency personnel who are responding to it.

The unit is located at Hancock Air National Guard Base in Syracuse.

"When we first rolled in here, the cell towers and phone lines were down," said JISCC Commander Lt. Col. Michael Adamitis. They’re set up next to the Emergency Operations Center (EOC) in Prattsville, and the VOIP phones, laptops, internet access, LMR radios and Wi-Fi they’ve given to the EOC personnel and first responders allow them to communicate with other command posts and coordinate help when and where it’s needed, said Adamitis, of Syracuse.

"We’re only using a third of our capability," he said. That’s all they’ve been asked to provide at this point, but they can escalate or scale back the size of their response at the request of civil authorities or changing situations, he added.

Initially the 174th JISCC was staged at Stewart Air National Guard Base near Newburg on Aug. 27 -- ahead of Hurricane Irene’s landfall -- in order to respond to New York City, Long Island, and other areas downstate, Adamitis said.

Though they were sent back to Syracuse on Aug. 30, they were back on the road to meet the disaster in the Prattsville area the next day, he explained.

They arrived and saw houses off their foundations, flooded buildings, washed out businesses and overturned or upside-down vehicles -- including cars, a bulldozer, a front loader and a tank truck, Adamitis recalled.

"Imagine a town covered in mud...everything shut down...masses of people on foot, on bikes, or in vehicles, moving up and down the main road of the town," he said. "There are very few buildings here untouched by floodwaters. Everything’s caked in mud. Some people have already moved their belongings out into their front yards for the wreckers to take."

Despite these sights, Adamitis was struck by the look of determination on the faces of the people.

"They’ve been kicked in the teeth, but they’re fighting back and winning," he stressed. Firefighters are hosing down parking lots, workers are delivering gravel and others are making the rounds in four-wheelers, taking food and water to those in need, he added.

"The activity here starts at 6 o’clock in the morning, and it ceases at 11 o’clock at night," he said, adding that the JISCC airmen are matching these 18-hour days. "We’re on the same basic schedule they’re running."

Even the post office is playing a part, he said.

"When we first got here, the U.S. postman was walking down the street, delivering mail to people as she saw them," he recalled.

The airmen have been inspired by the civilians’ resiliency, Adamitis said.

"It made me feel humble to see how these people responded to the disaster," he said. "They’re doing what they can to help themselves, and it makes us feel good to help them."

In Cobleskill, N.Y., Albany-area JISCC Soldiers are providing phone and internet access to civil authorities, along with phones, portable radios and laptop computers, said 1st Lt. Eric Muller, the commander of the JISCC there. They can provide dozens more of these communication devices and generate power to run or recharge them, he added.

"Communications is the key to everything," said Muller, of Malta, N.Y. "First responders need it. With the communications we’re providing, the first responders and Soldiers can get out to the field and perform rescues and deliver other emergency services. The population knows we’re here for them."

Soldiers of the MERC are providing phones for civil authorities and New York national Guard, and the crucial data links between units in the field and the Joint Operation Center in Latham, N.Y., he explained.

The MERC Soldiers are ready to provide phone access and some internet data ports to flood victims and other civilians as well, said Tremblay, of Raymertown, N.Y.

Muller -- a Saratoga County Sheriff’s Deputy in his civilian life -- appreciates the impact of cooperation and communication in times like these.

"Teamwork is everything in an emergency situation like this," he said. "Communication puts help where it’s needed, and saves time and resources to better serve the public in a time of need, especially now."