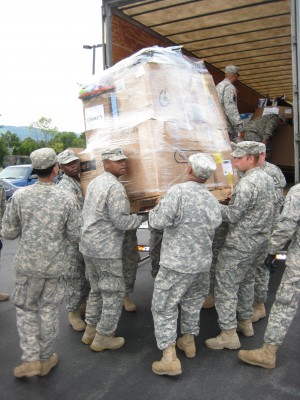 The Schenevus Worcester Rotary Club donated a truck full of household appliances, drinking water, brooms, and other items to an emergency shelter established at the Golding Middle School. After downloading the trailer, troops from Harlem’s 719th Transportation Company helped distribute the items to those affected inside the school.

Beginning the task to offload the large boxes of resources from the 18-wheeled trailer, some of the volunteers wondered how they were going to get a forklift to get the job done.

“We don’t need no forklift, we are the forklift,” shouted Sgt. Tyrone Johnson, motor transport operator with the company.

“We have enough man power to get this stuff off the truck,” Johnson said to his Soldiers and volunteers.

Johnson and the rest of the 719th Trans. Co. Soldiers sang cadences that roared throughout the shelter’s parking lot as they worked alongside volunteers.

“The cadences gave us motivation, because we were all tired and fatigued,” Padrone said. “I think it also brought up the morale to see Soldiers and people working together.”

After taking the charity resources off the trailer, the troops continued to help volunteers pack relief supplies into their vehicles until there was no room for a passenger to sit.

The volunteers said they going into the city to distribute the charity to flood victims.

“It was awesome working with you guys,” said Michael A. Kissinger, a young volunteer and alumni of Golding Middle School. “I respect what you guys do.”

“Everyone shows their gratitude and appreciation for us being here,” said Padrone. “It’s not just us being here, helping, but just them know that someone cares, that somebody is watching what’s going on here and sent us here to take care of them instead of ignoring them, even though it’s a small community.”