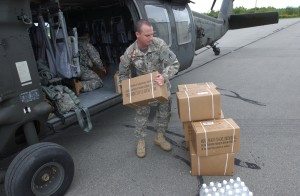 BINGHAMTON, NY (09/08/2011)(readMedia)-- The New York National Guard reshuffled troops, vehicles and aircraft on Wednesday and Thursday, Sept. 7 and 8, and went from one disaster to another as New York Governor Andrew M. Cuomo directed state resources towards Binghamton in anticipation of cresting flood levels on Thursday.

By Thursday afternoon, 350 Soldiers and Airmen were on duty in the Southern Tier city, equipped with 44 vehicles, including high-axle trucks that could negotiate flooded streets. Six aircraft-two Air National Guard HH-60 Pave hawk Search and Rescue helicopters, two Army National Guard UH-60 medical evacuation helicopters with hoists, a "slick" Uh-60 and a CH-47 Chinook heavy lift helicopter-were on the ground at the Broome County Airport ready to assist as well.

The landfall of Tropical Storm Irene over New York City and Long Island on August 28, and resulting heavy rains which caused flooding in mountain valley towns, had resulted in Governor Cuomo ordering the New York National Guard to put 2,700 Soldiers and Airmen on duty.

More than 770 New York Army and Air National Guard Soldiers and Airmen were still on duty as the remains of Tropical Storm Lee swept up through the United States. The heavy rainfall boosted the water level in the Susquehanna River, which runs through the city of Binghamton, to more than 18 feet above normal in 24 hours.

On Thursday, county officials ordered about 10,000 residents to evacuate in the region.

So Guard resources shifted as the disaster needs of local authorities moved into Broome County.

Soldiers from the 2nd Squadron, 101st Cavalry, headquartered in Niagara Falls, who had been heading towards Greene and Schoharie counties in the Hudson Valley, were rerouted to Binghamton on Wednesday, Sept. 7. The troops had been due to relieve Soldiers who had been on duty since Tropical Storm Irene hit New York on August 28.

Soldiers from the 204th Engineers Battalion, which is headquartered in Binghamton, who were on duty in Greene and Schoharie counties headed back to their home base to assist residents.

As flood waters rose on Wednesday night, three LMTV trucks from the 204th’s field maintenance shop responded to police requests and rescued 80 civilians from an inaccessible area and moved them to higher ground. Thursday morning the National Guard Soldiers were on the move again to rescue visitors to the area, trapped in a Hampton Inn in Tioga County.

The Soldiers have been doing exceptional work, Lt. Col. James Freehart, the commander of the 204th Engineers said.

Soldiers of the 101st Signal Battalion, who had been on duty in the Hudson Valley, were also moved into the Binghamton area at the governor’s direction.

The rest of the 884 Army and Air National Guard members assigned to state emergency missions remained on duty in logistical support positions or in Greene, Schoharie and Delaware counties.

Major General Patrick Murphy, the Adjutant General, and Assistant Adjutant General Brig. Gen. Anthony German were on the ground in Binghamton at the direction of Governor Cuomo to help direct National Guard assets in support of local authorities.