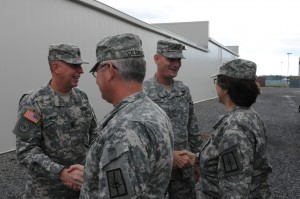 GLENVILLE--Although they’re a small unit, the 30 members of the 501st Ordnance Battalion received a massive welcome when they returned home after 10 months in Iraq and Saturday, Oct. 15. As the steady hum of anticipation crept across the room, small heads slowly settled above the shoulders of parents, grandparents and friends, all trying to give children the first glimpse as Soldiers of the unit got off the bus from Joint Base McGuire-Dix, where they had been out processing. The reception is the first thing the Soldiers come home to and has a major impact on keeping moral high for Soldiers to know they have the support of everyone, said Major General Patrick Murphy, the Adjutant General of New York. “This was probably the best reception I have seen yet,” Murphy said, as he watched the Soldiers reunite with their families. The battalion, which deployed to Iraq in December 2010, was responsible for overseeing the operations of three Explosive Ordnance Disposal companies operating in nine provinces southern Iraq, from headquarters in Basra. They were the battalion so everything goes through them,” Sgt. 1st Class Frank White, the rear detachment Non-Commissioned Officer- In -Charge of the rear detachment, said. “Supply functions, administrative duties and any missions executed they coordinated so they were extremely busy.” For the Soldiers, leaving family home is often considered one of the hardest parts of any given deployment and when they have such extensive duties for their mission, they cannot be distracted, Soldiers said. “Being away from my family and knowing that they could need me home is really difficult to think about,” said Lt. Col. Robert Mitchell, the battalion commander. “I could see the relief on all of their faces as soon as I walked in.” Family members of the 501st Soldiers joined together throughout the deployment to form the Family Readiness Group (FRG) that would support each other as their loved ones where overseas. This FRG organized the homecoming for their Soldiers as well as contacted other family members throughout the deployment to ensure that families were looked after and Soldiers would know that everything was ok back home. “I could say every week I received emails from the higher Family Readiness Groups letting us know what was going on over there,” Denise Church, wife of the 501st Command Sergeant Major Ken Church said. “They kept us very well informed.” Being separated from part of your family is an adjustment not easily made. “I’m getting my life back is what I call it,” Church said. “Part of my life was gone and today I’m getting that part back.” The reception Soldiers receive is important in knowing that they were not forgotten.