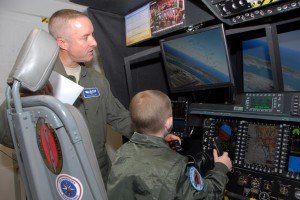 Donovan Benzin became a Guardsman for a day at the 107th Airlift Wing, Niagara Falls ARS. Lt. Col. Gregory Miller shows Donovan how to fly a C-130 aircraft on a simulator.

NIAGARA FALLS AIR RESERVE STATION, NIAGARA FALLS, NY - -- Saturday, Nov. 20, a five-year-old boy who recently battled cancer got the chance to be a Guardsman for the day here. His day was part of a military-themed experience for the boy that included a bedroom makeover.

Donovan Benzin was selected by Special Spaces Buffalo, NY, a nonprofit charity to receive some special attention. The charity’s mission is to "create dream bedrooms for children with life-threatening illnesses." The organization redecorates the child’s bedroom in one day and makes arrangements for the family to have a fun time outside of the house while they work. Donovan’s wish was for a military-themed room. Special Spaces contacted the 107th to request a base tour.

Donovan, along with his mother, sister, and great uncle, started their day with a limousine ride to the air base. The service was donated by TLC Limo and Concierge Service of Western New York.

Lt. Col. Gregory Miller, 107th Airlift Wing pilot, escorted the family around the base. To start, he presented Donovan with a flight jacket, complete with name and unit patches. A flight simulator was available so Donovan could "fly" a C-130 himself. The Boeing flight simulator is here temporarily to demonstrate the new cockpit that will eventually be installed in Niagara’s C-130s.

Donovan then was able to tour a C-130 aircraft and take a seat in the cockpit. He visited with the flight crew and took it all in.

"He’s happy and not thinking about hospitals. He’s being a little boy," said Donovan’s mother.

Some other highlights of the family’s visit were trying out night vision goggles, watching a C-130 practice an airdrop, and a stop in Security Forces. Donovan said he wants to be a military police officer when he grows up, so he was very excited to visit with the Security Forces members. Tech. Sgt. Adam Piedmont showed Donovan the weapon’s storage area and allowed him to safely hold a few of the weapons. The boy’s face glowed as he touched the M-16 and M-240 firearms.

Donovan was diagnosed earlier this year with non-Hodgkin’s lymphoma, a form of cancer rarely seen in children. He had surgery and aggressive chemotherapy that required a lengthy hospital stay to beat the disease, which is now in remission. His mother says that he is now cancer free and it is likely that he will live a long life.

"This has been so fulfilling. To see everyone who has been involved in this is just great. Buffalo, for being a small city, has a big heart," said Donald "Gus" Buczek, Donovan’s great uncle and godfather.

What was Donovan’s favorite part of his day as a Guardsman?

"Getting to hold the guns," he said.