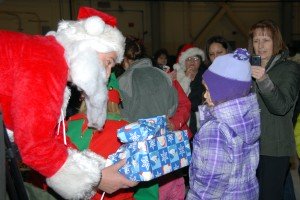 NIAGARA FALLS AIR RESERVE STATION--A member of the 107th Airlift Wing, dressed as Santa Claus, presents a gift to one of 15 special needs kids who visited the wing on Dec. 11 and saw Santa arrive by C-130.

The C-130 landed and then pulled up with Santa waving from the top hatch of the aircraft. The children greeted him with excitement from the hangar where they were waiting nearby. Santa and a helper elf entered the hangar bearing their sacks of gifts. The toys were specially selected for each child.

Santa and his elf passed out the gifts and took the time to talk to each child.

"We came to the air show here this summer. He fell in love with airplanes." his mother said.

Stefanie Teschemacher, a mother of one of the preschoolers, kept Santa’s arrival as a surprise. She told her son that they were at the airbase to see planes and to meet the people in uniform, whom she referred to as "our heroes."

"This is a lot to take in for the kids. Seeing all of you here is a great experience in itself," she said.

The 15 children were from Niagara Children ETC, a preschool that caters to special education students. The school is just across the road from the airbase. The school’s director of educational services, Cheryl Oliver, was pleased to be involved in the community event.

"We did it for the children, but for the parents it was special to see service members reaching out to the children." Oliver said. "It was a generous and thoughtful surprise that (the 107th) would want to do something for us." she said.

"The community has done so much for us, we wanted to give back," Col. John Higgins, 107th Airlift Wing Vice Commander said.

"We were glad to be able to bring some Christmas cheer to our neighbors," he said.

This was the first ever event of its kind for the 107th. The unit plans on making "OPERATION SANTA CLAUS" an annual event.

"We look forward to picking up Santa and bringing him back here to visit the children next year." Col. Higgins said.