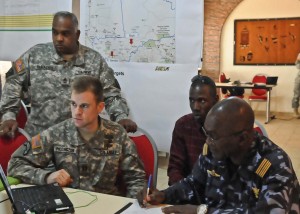 MOPTI, Mali -- The 369th Sustainment Brigade “Harlem Hellfighters,” a National Guard unit from Harlem, N.Y., provided operational support for Atlas Accord 2012, a bilateral humanitarian and partnership exercise sponsored by U.S. Army Africa. The brigade is working with the Malian Defense Forces (MDF) in a partnership exercise in Sevare, Mali, to assist in training several nations on different techniques to deliver humanitarian aid. “Harlem Hellfighters” were given their nickname during World War I by the German soldiers fighting against them. “Maybe that’s the greatest honor a Soldier can get on the battlefield is to be named by your enemy,” said U.S. Army Col. Reginald D. Sanders, 369th SB, deputy commanding officer for Atlas Accord ’12 from Henderson Harbor, N.Y. “The ‘Hellfighters’ never gave ground and always advanced no matter the obstacles. The Germans could not scare them away.” During the opening ceremony, Sanders said the planning of this exercise was in the works for some time and both the host nation staff and the U.S. military did a great job getting everyone to the point of execution through mutual planning and organizing. The preparation that went into this exercise includes: aquiring country clearances; inoculations and initial training for the Soldiers involved; and interfacing with different units, the Malians and doing a few on-the-ground visits to find the best way to help the Malians execute the exercise. “We are here for two reasons; one, to exchange ideas with the Malians and help them extend their capabilities and to learn from them. We have Army National Guard, active and reserve units here with a lot of different skill sets. We are trying to learn from each other. The second piece is to be ambassadors to Mali from the U.S.,” said 369th SB Capt. Tim Piddington, from Stamford, Conn. Rockland County, N.Y. native and Army Warrant Officer Douglas Haydak, 369th “Hellfighters” supply systems technician, is working at Atlas Accord ’12 as the contractor’s officer representative with the Malian people. “The exercise we are doing here is to assist the Mali Defense Forces in teaching them methods for providing assistance in remote areas that may be experiencing famine and may not be readily accessible by road,” said Haydak. [Soldiers] can exchange ideas about aerial delivery with them that may help the Malian people provide water, food or medical aid.” The “Harlem Hellfighters” and MDF worked closely and shared many experiences in preparing for Atlas Accord ’12. “The experience with the Malians has been great, they have been very kind and generous, eager to interact with the U.S. and the partner nations on the ground,” Haydak said. “They seem very responsive to be active with the cultural exchange.” “I have had no difficulties with this exercise and have learned the Soldiers from the 369th and Malian soldiers have different viewpoints and we are learning from them,” said MDF Security Operations Liaison Lt. Abdrahamane Kon a native of Mopti, Mali. “We are hoping for good training from this activity,” he said. U.S. Soldiers are expected to perform anywhere around the world and need to be familiar with other cultures. “The end state of this exercise is allowing the Malians to successfully project to all regions of their country to provide them with much needed water, food and medical supplies,” Piddington said. “We can always keep in mind, despite the fact they may have less than what we do, they have high morale and I hope to learn more about the Malians and their military,” he said.