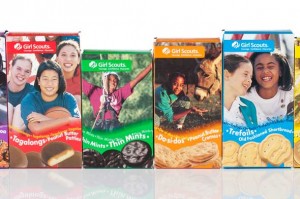 Under their “Operation: Cookie” charity, the Girl Scout Council of Suffolk County, N.Y. delivered 3,600 boxes of cookies to brigade Soldiers, who are here preparing to deploy overseas. Brigade Soldier Sgt. 1st Class Walter Meshenberg organized the donation with his cousin Jonathan Chekin, who works for the Suffolk County Girl Scout Council. “Operation: Cookie” allows people to buy boxes of Girl Scout cookies to be donated to members of U.S. Armed Forces. In addition to his other duties, Meshenberg, of Mastic Beach, N.Y., is the brigade’s safety non-commissioned officer-in-charge. While deployed to Iraq with the New York Army National Guard’s 3-142 Aviation Battalion in 2009, he worked through channels to obtain some special gear for the battalion’s helicopter pilots and refuelers.

He welcomed the challenge of getting cookies for the troops, Meshenberg said. "I’m pretty good at special projects," he said, smiling. He began planning organizing for the donation in mid-February, Meshenberg said. He took some good-natured teasing from some of his fellow Soldiers, who said he couldn’t pull it off, he added. His response showed his determination. "I said, ’watch me,’" Meshenberg recalled. The cookies, stacked nearly 6 feet high on three shrink-wrapped pallets, were delivered via tractor trailer on Feb. 24, a Friday. Meshenberg and some other Soldiers immediately broke them down for distribution to the battalions and other units of the brigade. "That ended up being one box per soldier," Meshenberg said. "By Monday we delivered most of the cookies to most of the Soldiers in the brigade."

Once they got over their disbelief, the Soldiers and units thanked him, he said.

"The battalions were saying, ’this is a joke, right?’" Meshenberg recalled.

Meshenberg expressed his thanks to the Girl Scouts and his cousin, calling the donation "phenomenal." He encouraged others to buy cookies for troops via “Operation: Cookie.” "Seeing the smiles of the Soldiers is important," Meshenberg said. "A box of cookies makes a difference."