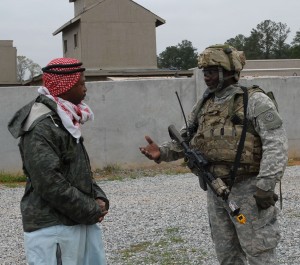 Sgt. Tony Shelton (right) speaks with a role player in a mock village during a field training exercise here March 9. Taylor belongs to the 2nd Battalion, 108th Infantry, 27th Infantry Brigade Combat Team, and brigade Soldiers are here preparing to deploy overseas. Soldiers like Shelton learned how to gather information by making friendly conversation with civilians, and the exercise tested the battalion’s ability to perform its Afghanistan mission.

CAMP SHELBY, Miss -- By the end of their second patrol into the mock village of Al Jaffa here, Sgt. 1st Class Kevin Taylor and his Soldiers had gathered enough information to confirm a rumor built into the training scenario: that the police chief was corrupt and not to be trusted.

That was just one of the training goals the 2nd Battalion, 108th Infantry accomplished during a field-training exercise here from March 7 to 10. The battalion belongs to the 27th Infantry Brigade Combat Team, and units of the brigade are here preparing to deploy overseas.

Complete with role players like the corrupt police chief, the exercise was designed to replicate conditions in Afghanistan and test the battalion’s ability to carry out its mission there: to mentor, advise and assist Afghan government agencies like the Afghan National Army, Afghan National Police and Afghan Traffic Police, said Command Sgt. Major David Oliver, the battalion command sergeant major.

Many soldiers in the battalion are Afghanistan veterans, Oliver said, and this is a unique, different type of mission for them. They’ll need to learn to let the Afghan security forces take the lead, while helping those forces solve systematic problems, overcome operational differences and work together.

“We have to get out of the mindset of doing things ourselves, and get the Afghans to do them,” Oliver said.

Nonetheless, the exercise tested the Soldiers’ combat skills. Along with manning a quick reaction force, the battalion lived in tents in walled bases near the villages they were assigned to patrol, and underwent mock indirect fire attacks and several simulated mass-casualty events.

Despite these challenges, the battalion established an Operation Coordination Center -- one of its goals for the exercise. The coordination center is the key element for mentoring, advising and assisting the Afghan government agencies, Oliver said.

“It brings the Afghan National Army, Afghan National Police and Afghan Traffic Police together so they can coordinate their efforts,” he said. “Hence the name, ‘Operation Coordination Center.’” During the exercise, battalion command staff also identified strengths and weaknesses so battalion procedures can be streamlined and improved, he added.

Key leader engagements were integral to establishing the coordination center, Oliver said. Battalion elements like Taylor’s platoon took on these engagements, patrolling into the villages and meeting with leaders such as the police chief.

They had done similar exercises at the National Training Center at Fort Irwin, Ca. last year, but at the company level, said Taylor, who belongs to the battalion’s D Company, based in Ithaca, N.Y.

“This was broken down by platoon, so it was a little tougher,” he said.

Like all Soldiers, battalion troops are trained to observe and gather intelligence. Taylor said that while officers and senior non-commissioned officers met with key leaders inside village buildings, Soldiers were assigned to secure the village, observe things like the civilians’ behavior, note any changes in the village, and gather information by making friendly conversation with civilians outside -- a task he called “street engagement.”

“That’s what we’ll be doing in Afghanistan, or close to it,” said Taylor, a veteran of Afghanistan. “Just like Afghanistan, a lot of people speak English.”

According to the scenario, however, Al Jaffa had suffered several insurgent attacks, making his Soldiers wary of letting their guard down to talk to the civilians, Taylor said. But the training, which called for continued patrols, did its work, he added.

“By the second and third days, they relaxed and began to talk to people,” he recalled. “Automatically, they would do that outside.”

Returning to the base following one visit to Al Jaffa, Taylor’s troops and other Soldiers on his patrol could be heard enthusiastically sharing their observations with each other.

While he met and spoke with the police chief, platoon leader 1st Lt. Brendon Lalor met with village elders to build strong relationships with them, Taylor said.

The police chief continually complained and tried to turn the conversation away from particular topics -- like the fact that he was conspicuously absent whenever the village was attacked, Taylor recalled. What’s more, he wanted to recruit police from outside the village, and his version of events just didn’t add up, he added.

“By the end of the second visit, I knew there was something wrong with this guy,” he said.

Soldiers excelled in the combat portions such as the mass-casualty exercises, said 2nd Lt. Nathan Holt, the executive officer the battalion’s Headquarters and Headquarters Company. Noting the Soldiers’ experience, observer-controllers had trouble coming up with ways to challenge them, he added.

“At the end, I heard we did extremely well, as did the medics,” Holt said.

The battalion’s time at the National Training Center set them up well for the exercise here, said battalion liaison officer 1st Lt. Jason Uhlig, of Syracuse, said. He’s looking forward to the challenges in Afghanistan, partnering with the Afghans and helping empower them. Exercises like this and key-leader engagements are part of that, he added.

“You can’t ever downplay the significance of building good relationships with your foreign counterparts,” he stressed.