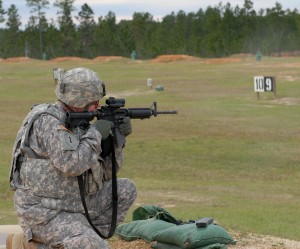 Base Defense Operations Cell (BDOC) Soldier Sgt. Luke Zeurcher of Mattydale, N.Y., engages targets with an M4 Carbine here Feb. 25. Zeurcher and other Soldiers of BDOC, who left here for Kuwait on March 17, are the first 27th Infantry Brigade Combat Team troops to undertake an overseas mission since the brigade deployed to Afghanistan in 2008. BDOC’s overall mission will be to oversee other Soldiers and contractors providing force protection at bases in Kuwait. Other brigade Soldiers are here preparing to deploy for overseas missions as well. (Photo by Sgt. 1st Class Raymond Drumsta, 27th IBCT Public Affairs).

Soldiers of the Base Defense Operations Cell (BDOC) left here on March 17, and are the first 27th Infantry Brigade Combat Team troops to undertake an overseas mission since the brigade deployed to Afghanistan in 2008. Other brigade Soldiers are here preparing to deploy for overseas missions as well.

Numbering over three dozen Soldiers, BDOC’s overall mission will be to oversee other Soldiers and contractors providing force protection at bases in Kuwait -- an important job which will also involve other tasks, including emergency management, according to Lt. Col. Robert Bready, the officer-in-charge of BDOC.

"We’re not manning the gates ourselves," said Bready, of Highland, N.Y.

A great many American service members, Defense Department employees and contractors live and work at Kuwait bases, he said.

"Risk is always present, no matter where we go," Bready said. "There are a lot of Americans at risk. You never know when a terrorist organization will turn their attention to Kuwait."

"Our Soldiers are experienced and trained in operations center work," Bready said.

One of those Soldiers is Staff Sgt. Kurt Miller of Whitesboro, N.Y., who described the deployment as "an old mission for a new army," because it involves force protection for civilians as well. Miller belongs to one of the BDOC’s base defense liaison teams, which assesses bases to discover possible vulnerabilities.

"We don’t just deal with ourselves, we deal with everybody," he said.

"It was a lot different than I thought it would be," she said. The Soldiers of BDOC will bring a spectrum of skills to the mission, she added.

He wasn’t looking forward to the deployment until he became a member of the base defense liaison team, said Sgt. Mike O’Rourke, of Camillus, N.Y. Doing vulnerability assessments involves driving from place to place, something he enjoys, he added.

"I was a colonel’s driver, so I got used to it," he said. His cavalry scout training has given him special knowledge of tactics which will be an asset to the team, he added.

O’Rourke encouraged the Soldiers’ families to be supportive.

"My wife is very supportive, and it makes going overseas much easier," he said.

In addition to deploying to Afghanistan with the brigade in 2008, Miller has deployed to Iraq, and has taken part in humanitarian and peacekeeping operations in Haiti and Bosnia. He’s enthusiastic about the mission as well.

"I’m with a really cool group of guys and gals, and I’m looking forward to working with them," he said. "It’s time. We’re ready to move."

"We’ve done all the training we can do, and it’s time to move on and put it to use," she said.