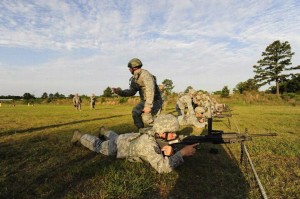 The team tested their marksmanship skills against the finest military marksmen in the world. There was no finer format to evaluate their professional ability with small arms than training events like the Winston P. Wilson. This event has a remarkable history and fosters a tremendous spirit of competition and camaraderie across the nation.

The N.Y. Team was lead by Stefik, 107th Security Forces . "The goal for each participant is to leave the match validating perishable marksmanship skills, and enforce the lessons learned with fellow service members, and to ensure the success of future military operations", he said. All team members have been forward deployed and understand the importance of personal readiness and combat-oriented training. With 16 individual and team matches, the week long event was both physically and mentally demanding.

There were approximately 400 participants from every state in the union and territories.

Doherty has competed in the State TAG match and regional matches. " At every match all participants still have a healthy and enthusiastic attitude open to learning, no matter what marksmanship level they are at," he stated. " From this experience all team members return to their units with solid training in combative disciplines."