204th Engineers honored for their response to flooding in Catskills, Adirondacks and Binghamton area 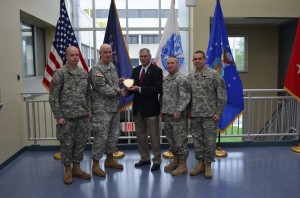 BINGHAMTON--Binghamton’s 204th Engineer Battalion was recognized as the Unit of the Year for 2011 by Salute Magazine, a military interest publication produced six times a year by Garden City, New Jersey company Family Media.

Since 1985 Salute has been distributed free on military bases and installations. The magazine focuses on music, sports, travel and dating for military singles and families.

The magazine also features a Unit of the Month feature in which outstanding military units are recognized for their service at home and abroad.

In the article announcing the selection of the 204th Engineers the magazine pointed out that the 1156th Engineer Company rescued citizens in the Catskill Mountain village Windham from rising flood waters, while the 827th Engineer Company cleared creeks that threatened to flood local roads. Other battalion members cleared Route 73 in the Adirondacks to reopen the Keene Valley’s access to the rest of the state and then more than 300 members of the battalion responded when Binghamton was flooded.

The unit’s outstanding service led to its selection as Salute Magazine Unit of the Year .

"A number of the Soldiers were impacted by the flood, but none wished to stop the important job they were doing and most had to be told to go home to take care of their affairs, " said Lt. Col. James Freehart, the battalion’s commander.