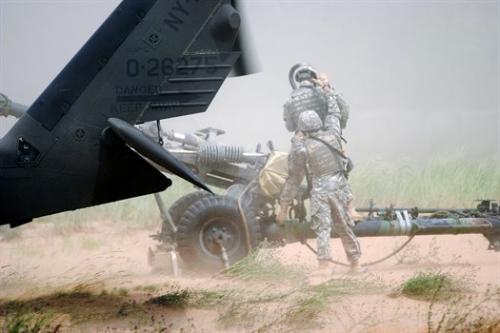 FORT DRUM-Seven months of training and preparation by the artillerymen of the 1-258th Field Artillery climaxed in 46 minutes on a hot July day as two M119A2 howitzers sling loaded in underneath UH-60 helicopters sent eight rounds downrange at their target. Sixteen minutes later the howitzers were being hauled out of the landing zone by UH-60 Blackhawks of the 3 -142nd Aviation and 34 minutes later the two guns, the crewmen and the advance party were all back on the pickup zone in the assembly area after conducting a textbook artillery raid. After years of learning to use 105mm, M119A2 light towed howitzers instead of the 155mm, M109A6 self-propelled guns many of the battalion’s veterans had once trained on, and deploying to Iraq doing MP duties the 1-258th FA now had a firm handle on a key light artillery task, said Lt. Col. Michael Hoblin, the battalion’s commander. This successful Annual Training event demonstrated that the battalion can fulfill a key mission task, even in a resource constrained environment, because of the quality of the non-commissioned officers, Hoblin said. Training in conducting an air assault artillery raid is so critical to an M119A2 - equipped artillery battalion that it should be done annually instead of just every three or four years, said Staff Sgt. William Torres, the section chief of Battery B’s Gun 5. An artillery raid is conducted when a critical target is outside the normal 14 kilometer range of the 105 millimeter rounds fired by the M-119 towed howitzer, explained Major Pete Mehling, the executive officer of the 1-258th. The drill calls for using the lift capabilities of the UH-60 Blackhawk to move howitzers, ammunition and gun crews into a position-often behind enemy lines-which brings the high-value target into range. In a full-up artillery raid a platoon of infantrymen is air assaulted in first to secure and hold the landing zone. AH-64 Apache or OH-58 Kiowa Warrior helicopters accompany that initial assault to provide overwatch and security. An advance team from the artillery battalion follows and uses GPS technology to determine the proper place for each gun. Then the UH-60s lift in the guns, crews and ammunition. Once the guns are in place they fire rounds downrange and the helicopter and gun crews scramble to extract the guns and Soldiers before the enemy can react. Getting ready to conduct an artillery raid as part of 2012’s AT meant getting Soldiers qualified at the 10-day Air Assault Course or the five-day- long Sling Load Inspectors Course, Mehling explained. The Soldiers who completed that training provided the expertise B Battery needed to plan and conduct the artillery raid. Training in air assault tactics, techniques and procedures began in January and ran through April, Mehling said. The battalion’s officers and NCOs conducted training with aviators from the 3-142. Officers studied air assault tactics, while NCOs worked on the hands on skills of organizing the operation. Early on the decision was made to select two gun sections from Battery B to conduct the mission, Mehling said. All of the battery’s Soldiers got the training, ensuring that there was a critical mass of knowledge. But since only two guns would conduct the actual mission all eight guns in the battery competed against each other to be the best, Mehling explained. The competition kept everybody on their toes, he added. By July 16th the two best sections had been picked and both the aviators and artillerymen were ready to go. At 1245 the advance party lifted off from the friendly LZ and eight minutes later was on the ground at the LZ which was supposed to be behind enemy lines. At 1315 the two guns were on the ground and the crews were ready to start shooting. The first round went downrange at H-46 minutes and all rounds were fired-tightly around the target-at H+50 minutes. It is important to note that special considerations were taken due to this being a training exercise at Fort Drum which added time to the execution of the mission. Just a little over 90 minutes after the mission had started the exercise was complete and the 1-258th had another vital skill they could offer to the ground combat units the battalion supports, Mehling said.